By Tom Camden, Head of Special Collections and Archives 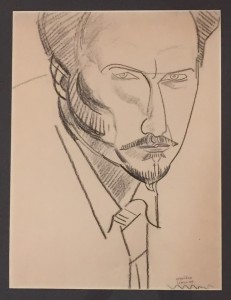 The University Library recently acquired from Patrick Henry Community College a rich collection of correspondence. It is referred to as the Pound-Carter Collection. Here is how it all started.

Thomas Henry Carter, a Martinsville, Virginia native, graduated from Washington and Lee in 1954. Although he was an excellent student, Carter is most remembered for the central role he played in the creation of Washington and Lee’s literary magazine, Shenandoah.

As editor, Carter propelled Shenandoah into the top ranks of literary journals. But good publications are not produced single-handedly or in a vacuum. The network, mostly through correspondence, that Carter established with writers such as Ezra Pound, Ray Bradbury, and T.S. Eliot directly led to their essays, poetry, and stories published in Shenandoah. A detailed article titled “Ezra Pound, Thomas Carter, and the Making of An American Literary Magazine” by Andrew J. Kappel and published in Shenandoah in 1980 describes the period of Carter’s editorship of Shenandoah. In particular, his relationship with Ezra Pound, whom he had visited while Pound was confined to a mental hospital in Washington D.C. in the early 1950s, took on a new depth as Carter emerged as an editor of outstanding capabilities and promise. Pound’s respect for Carter led him to plan with Carter a new literary venture in the United States – a magazine embodying the ideals of free thought and free expression so loved by Pound, who had suffered the terrors imposed by censors. However, because of Pound’s failing health as well as Carter’s chronic and unpredictable illnesses, the project never came to fruition.

Instead, Carter continued his literary studies at Vanderbilt University where he wrote his master’s thesis on poet William Carlos Williams. After a fellowship with the Kenyon Review, Carter started, but never finished, a Ph.D. program at Duke University.

He was critically injured in a car wreck in the early 1960s and returned to his home town of Martinsville to teach at the high school and at the Patrick Henry Branch of the University of Virginia, now called Patrick Henry Community College. Yet, his correspondence with the broad world of literature didn’t cease. In the early 1960s he organized a literary seminar for students at the high school featuring visits from established authors. However, his health continued to fail, and Carter died in his early thirties on November 21, 1963 (the day before the Kennedy assassination).

Only recently has the Pound connection to W&L been rediscovered through letters between Pound and Tom Carter, who edited volumes 2 through 4 of Shenandoah. At that time, 1951-1953, the literary journal was a student-run publication. (The previous editor was Tom Wolfe, W&L class of ’51.) The Carter-Pound correspondence continued for more than a decade. The letters document that Pound continued his mentoring of emerging writers and literary publications throughout the 1950s while confined to the mental hospital. The letters from Pound reveal lucid thoughts but with the same erratic punctuation and phrasing that his correspondence is known for. Throughout the letters Pound, in his colorful manner, advises the young editor and aspiring writer to seek out his contemporaries in an ongoing dialogue about literature and publishing.

After Carter died, his collection, consisting of 1,300 books, magazines and other printed material, as well as nearly one hundred pages of correspondence with Ezra Pound and an original portrait of Pound by Wyndham Lewis, was donated to Patrick Henry Community College in Martinsville. In the Spring of 2015, after discussions with librarians and administrators at PHCC, it was unanimously decided that the collection would be donated to Washington and Lee University.

In a statement to the press, Barry Reynolds, Coordinator of Library Services at PHCC, said that donating the collection to Washington and Lee is a great way to honor Carter’s memory. “Given the importance of the Pound-Carter correspondence, both to the academic world and to the founding of “Shenandoah”, I believe we have an obligation that these materials get the widest dissemination for scholars. “

The Pound-Carter correspondence, which has already been showcased in a Spring 2015 class, coupled with existing archival manuscripts in the Shenandoah collection, will serve as a future springboard for establishing an undergraduate Digital Humanities pedagogy in literary studies that can be applied to many literary domains, particularly marginalized areas, as well as extending to other areas of the humanities. Our students and researchers will be able to sit down with these letters and make that connection – something you can only do with an original. The last time I was at Patrick Henry Community College, I thought about what Tom Carter would want, and I think he would be delighted to know that students at his alma mater are going to be looking at his collection for years to come.

[reprinted with permission from Folios: The Magazine of the University Library (Fall, 2015)]