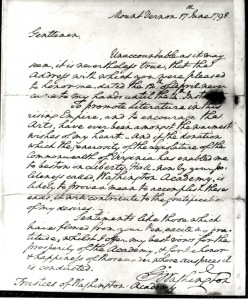 A glimpse of the original.

In 1798 George Washington wrote the trustees of the newly re-christened Washington Academy (now Washington and Lee University) to encourage promotion of literature and the arts at the institution.  In an era when the arts and humanities are being marginalized, it is rewarding to see WLU still heeding the words of one who is, in many ways, one of the founders.

Gentlemen,
Unaccountable as it may seem, it is nevertheless true, that the address with which you were pleased to honor me dated the 12th of April never came to my hands until the 14th instant.
To promote Literature in this rising Empire, and to encourage the Arts, have ever been amongst the wishes of my heart. And if the donation which the generosity of the legislature of the commonwealth of Virginia has enabled me to bestow on Liberty Hall, now by your politeness called Washington Academy, is likely to prove a means to accomplish there-enat, it will contribute to the gratification of my desires.
Sentiments like those which have flowed from your Pen, excite my gratitude, whilst I offer my best vows for the prosperity of the Academy, & for the honor & happiness of those under whose auspices it is conducted.
G Washington
Trustees of Washington Academy 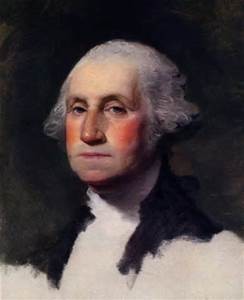