OVER the great city,
Where the wind rustles through the parks and gardens,
In the air, the high clouds brooding,
In the lines of street perspective, the lamps, the traffic,
The pavements and the innumerable feet upon them,
I Am: make no mistake—do not be deluded.

Think not because I do not appear at the first glance—because the centuries have gone by and there is no assured tidings of me—that therefore I am not there.
Think not because all goes its own way that therefore I do not go my own way through all.
The fixed bent of hurrying faces in the street—each turned towards its own light, seeing no other—yet I am the Light towards which they all look.
The toil of so many hands to such multifarious ends, yet my hand knows the touch and twining of them all.

All come to me at last.
There is no love like mine;
For all other love takes one and not another;
And other love is pain, but this is joy eternal. 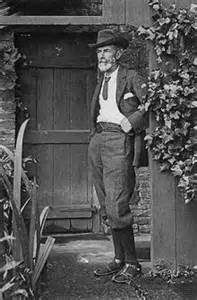 Edward Carpenter was born in Sussex, England in 1844. He’s most known for his political views and is often cited as a proponent of mystical socialism. His radical leanings may have pushed him from the spotlight, but Carpenter was well known and respected in his early career and was also an early proponent of LGBT rights. After graduating from Cambridge in 1868, he worked as a curate for the Church of England, though he would say that it was more out of convention than conviction. Leaving the church in 1874, he became heavily involved in politics, joining the Socialist League. Heavily influenced by Walt Whitman, Carpenter made trips to America in 1877 and 1884 to visit him, they became close friends.

Carpenter’s life journey and political ideology are interwoven within the roots of “Over the Great City.” The first stanza is a subtle reference to the dichotomy between the free movement of wind through the city, and the rigid lines of the city itself. Carpenter is not a fan of the dichotomy, based on his use of ‘brooding’ and his description of people as ‘innumerable feet.’ But why open with the wind, if he’s going to force a perspective shift to the street on line 5? Because that’s the perfect way to set himself up a cogito ergo sum smackdown. By stating “I Am,” followed by a very Nietzsche-like command not to be deluded, he’s making it clear he’s getting into philosophical territory.

“Think not, because I do not appear at the first glance— The centuries have gone by and there is no assured tidings of me.” Well that seems like a pretty strange statement, because how many glances does it take for him to appear? The answer is tied back to the dichotomy between the freedom of wind and the structure of society. Simply put, he is saying that he is not sure of anyone’s existence amid the crowd. “Because all goes its own way that therefore I do not go my own way through all.” How can someone not go their own way? They go someone else’s. Where Descartes said “I think, therefore I am,” Carpenter is applying it to society as if to say, ‘if you must think to be, and you think like everyone else, are you?’

It’s no secret that Carpenter despised formulaic society. He even wrote a book called Civilisation, its Cause and Cure where he suggested civilization was a disease that human societies pass through. But politics aside, he’s making an intriguing statement regarding the validity of self. That in order to truly be one must have not only thought but original thought. Suggesting that those amid civilization tend to galvanize towards a single hive mind indistinguishable from the sum of its parts.

That he follows the disruption of Descartes with the image of bent faces hurrying in the street, a crowd of people—“each turned towards its own light, seeing no other,” further references the rigidity of societies due to close mindedness and an unwillingness to think new thoughts. Though on my first reading I got a nice chuckle because all I could think about were smartphones, I assure you Carpenter was not speaking of smartphones because this was published in 1917, though it says a lot how fitting they are to what he’s saying.

“I” and “Light” are curiously capitalized on line 16, which may suggest that carpenter is not the speaker in the poem. Light could mean anything capitalized since it is so connected with ideas of purity and divinity, though while Carpenter did serve as a curate, I doubt that it is meant to be God, even with the reference to his love as “joy eternal.” Though that is a possible reading, I’m much more inclined to say “I” is ego personified and the reason they all look towards it is that they all believe they are individuals.