After you died I took you for a drive
across northern New England
refusing to leave you
to the violence of your death.
I took the river and lakes route
following the sinuous Androscoggin
and slipping between vitreous
ponds, Bach sonatas setting the mood,
the harpsicord trilling like thrush song
viola reaching into the dark register
of feeling that crossed three centuries
to be with us, that miracle of art’s
timelessness. I don’t want to
imagine the moment of impact
though here it is refusing to depart.
I’ll counter it with water
and picture you slipping under,
your wild hair waving like rockweed
in the salty slosh, your eyes opened
to the benthic marvel of deep sea
creatures no human has ever seen,
the seahorses ponying up to watch you
float among them, the bioluminescent
swimmers of the lightless zones
coming close to illuminate the way,
bluefish swimming back and forth
bragging to you of their color palette,
the all-embracing water of our origin
and its inventive power, molecules
that danced as mountain snows, churned
in spring down rocky forest streams,
sprawled into the languorous ecstasy of rivers
then found a delta where they dispersed
into the moon slung sea you loved,
your mind and body one with them now.

–in memory of Rafe Sagarin 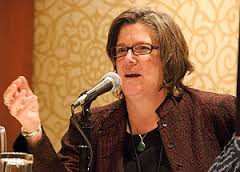 Alison Hawthorne Deming’s “Afterlife,” like many of her other poems, proves that poetry and science need not be contentious or contradictory enterprises. Indeed, the language of science enriches and enlivens Deming’s work, and her poems’ emotional accessibility distinguishes them from other great science-centered poems by A. R. Ammons, Pattiann Rogers, and Forrest Gander. This is not to suggest that these latter poets fail to access emotional centers, but to acknowledge that Deming’s poems often manage to reach them more quickly, even as she delights in (and even because of) the risky diction of the scientific world. Indeed, Deming’s love of science and its highly textured nomenclature lend her poems an element of powerful strangeness that all great poems demand.

As carefully constructed and beautiful as the beginning of this elegy proves (the mention of Bach’s sonata suggests melody and countermelody, aural images that harmonize with the poem’s duality) the second half is especially potent. Fittingly, the last twenty lines of the poem, beginning with “I’ll counter it with water,” counterpoint the initial set-up and create a stark, unexpected, and forceful contrast.

These lines pull the reader down into an environment most of us will never know, an inverted, subaqueous heaven no sunlight can pierce and where no light exists, save the bioluminescent creatures that illuminate small nimbuses of water around them. These twenty lines are never end-stopped with a period, and thus we get the sense that we float unimpeded through this impenetrable dark, witness to sanctification of the passed away in an environment that will never accept our fragile, corporeal forms.

Deming then imagines the departed as earth-bound constellation, “dispersed,” thriving through water’s changeability, recognition that the dead are made alive via the microscopic (“molecules”) and the macroscopic (“snows,” “streams,” “rivers,” “delta,” and the “moon slung sea.”)

In “Afterlife,” Deming deals with death—the central motif for so many poets—in a way that eulogizes the bereaved as well as water itself, the element that nourishes us, constructs the majority of our bodies, keeps us vital, alive.