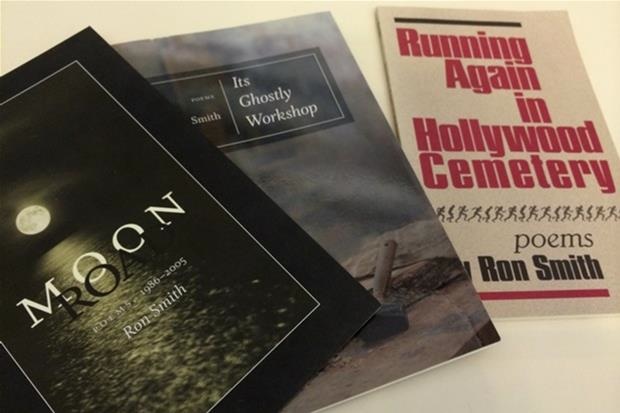 QUESTION: Does it matter how the poem looks on the page or on the computer screen? If so, why? The same words can be arranged differently– different margins, indentations, spacing. The general shape can be symmetrical or display gaps within lines or follow other more complicated patterns of typography. How do (or should) poets think about this? Can a reader use the visual deployment of text to assist in understanding a poem?

RON SMITH:
How poems look on the page matters to me more today than ever before. If a poem sounds good but doesn’t look right, I might consider it ready for a poetry reading, but not ready to publish.

As long ago as the seventeenth century, George Herbert shaped his poem “Easter Wings” like wings. More recently, John Hollander published a poem shaped like a swan (“Swan and Shadow”). Often referred to as “concrete poetry,” this sort of thing can be fun, I admit, but it’s always struck me as more of a gimmick. Joseph Addison said that Herbert’s shape poems were examples of “false wit,” and I tend to agree. So-called concrete or shaped poems are usually a bit corny, heavy-handed.

Still, such poems are extreme examples of something worth paying attention to.

Some poets claim not to care about how the poem looks on the page. If this is true, though, why don’t they eschew lines altogether and present their work as prose? One answer might be that even though the “real” poem is the auditory artifact, spacing and line breaks function more or less as musical notation. That is, they tell the reader how to hear the poem. That’s a function of the visual I certainly don’t discount.

But the way the poem looks is important for other reasons, I think. The so-called free verse poem exists in two ontologically distinct forms, the visual and the auditory. I believe the poet needs to take each form into account—and to consider their relationship.

Walt Whitman’s Louisiana live oak requires a different look from William Carlos Williams’s red wheelbarrow. The order embodied by the former is organic; the order embodied by the latter is mechanical. In Leaves of Grass Whitman offers us expansive lines for expansive matters. Williams typically gives us machine parts for life in the Machine Age; he actually defined a poem as a “machine made of words.”

In a way, this E.E. Cummings poem effectively combines the two approaches, the natural and the artificial, the organic and the flamboyantly man-made:

One of many things suggested by the poem’s visual expansion and contraction is its hero’s lifespan, the cowboy’s vigor spreading across the page until returned by death to a kind of pre-birth oblivion.

When I somewhat mischievously cast the stanzas of a poem in what carpenters and machinists bluntly call male and female shapes, I thought I was doing something not only appropriate to my poem, but possibly even original. The speaker is watching a film version of Romeo and Juliet in a theater packed with teenagers.

THE TEACHERS PASS THE POPCORN

even they who said it was all about sex
endured a raw, unforeseen regret
that was nearly intolerable. And the darkness,

the jostling, whispering,
giggling darkness around them, stilled.
Breathed. Rustled.

Then shuddered through them like the massed
oblivious dead suffering a final
vision of the youth they had negligently been,

the salt and sweetness each
truly believed for a moment he, she
would never taste again.

Many years later I found Sylvia Plath’s “Nick and the Candlestick,” which I cannot remember ever having read before 2014. Plath’s poem begins,

I am a miner. The light burns blue.
Waxy stalactites
Drip and thicken, tears

You don’t need to be particularly Freudian to see the pattern. (Nothing new under the sun, eh?)

More traditional forms might be thought be unmalleable in this way. However, even they can be shaped, can be cast as artworks for the eye as well as for the ear. Debra Nystrom’s sonnet “Pronghorn” manages to meander like its river. The poem begins,

Shadows appeared earliest in patches of rough, steep
drop below the far east ridge, where the bluffs
fell off first, and antelope
fed together at evening on sage and grama tufts

And it ends this way:

Their elegant necks angled down as everything sloped
toward the river more than a mile across there,
full of sandbars whose shapes

the water slowly rearranged, so no map
ever stayed exact.

Nystrom has given us a poem for the ear whose meaning is clearly enhanced by the eye.