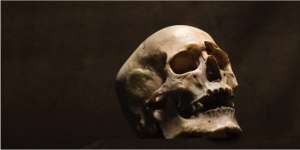 Start not—nor deem my spirit fled:
In me behold the only skull
From which, unlike a living head,
Whatever flows is never dull.

I lived, I loved, I quaffed like thee;
I died: let earth my bones resign:
Fill up—thou canst not injure me;
The worm hath fouler lips than thine.

Better to hold the sparkling grape
Than nurse the earthworm’s slimy brood,
And circle in the goblet’s shape
The drink of gods than reptile’s food.

Where once my wit, perchance, hath shone,
In aid of others’ let me shine;
And when, alas! our brains are gone,
What nobler substitute than wine?

Quaff while thou canst; another race,
When thou and thine like me are sped,
May rescue thee from earth’s embrace,
And rhyme and revel with the dead.

Why not—since through life’s little day
Our heads such sad effects produce?
Redeemed from worms and wasting clay,
This chance is theirs to be of use.

Footnote: Byron gave Medwin the following account of this cup: – “The gardener in digging discovered a skull that had probably belonged to some jolly friar or monk of the abbey, about the time it was dis-monasteried. Observing it to be of giant size, and in a perfect state of preservation, a strange fancy seized me of having it set and mounted as a drinking cup. I accordingly sent it to town, and it returned with a very high polish, and of a mottled colour like tortoiseshell.” – Medwin’s ‘Conversations’, 1824, p. 87. 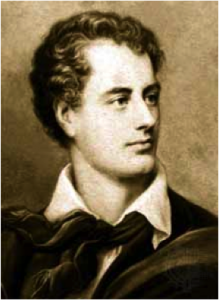 George Gordon Byron, commonly known as Lord Byron, was born in London in 1788. Byron is considered one of the greatest British poets, a leading member of the Romantic literary movement, and remains widely read in contemporary times. His most renowned poetic works explore variations on the epic form such as “Don Juan” which is considered an Epic Satire. As a historic figure Byron is remembered for his aristocratic excesses including numerous affairs with men and women, immense debt, and a total lack of regard for finances or decorum of the age. His appreciation for alcohol, as well as life’s darker pleasures, is evident in the featured poem, “Lines Inscribed Upon A Cup Formed From A Skull,” where he relates a mind’s usefulness in death, with joys to be had in life. People, says Byron, are often dull, yet wine never fails to disappoint, and thus the decay of a boring brain can serve a nobler purpose to those still living. Byron ponders the dark impermanence of life and the macabre aftermath of death. What use are people once they have passed? Byron’s impetuous personality plays on the notion of repurposing individuals after death, but also with the notion of wine as an escape and worthy pastime in life. In the line, “The worm hath fouler lips than thine,” he toys with the inevitability of death and grotesque decay as a cavalier occurrence with possibly fruitful outcomes. For Byron, if death must come, then wine drinking is as good a use of any for the parts we leave behind.

This poem was chosen to represent Shenandoah’s recent fascination with all things Noir, ghoulish, skeletal, and indicative of the imminent Halloween season. Byron wrote this poem while living in his mansion, Newstead Abbey, which was previously inhabited by a monastery. Byron’s alcoholism and indebtedness led him to dig across the property for buried treasure possibly left by the monks. Although no treasure was ever found, he did find the monk’s skeletons, specifically a large skull, which he chose to fashion into a wine goblet for his personal use and amusement.

In addition to his poetic work, Byron is also known as a translator, Armenian scholar, world traveler, newspaper editor, and Grecian revolutionary. His travels throughout Europe included a seven-year stint in Italy before championing the Greek War of Independence against the Ottoman Empire in 1823, for which he is remembered as a national hero. He died only one year later, at the age of 36 from complications of bloodletting, a common practice at the time.