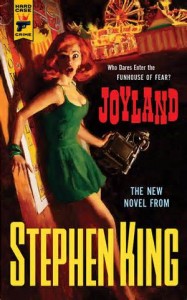 I lost interest in Stephen King almost three decades ago, though I had enjoyed Salem’s Lot as a light, shivery entertainment, The Shawshank Redemption as a relatively serious crime novel and The Shining as a good ghost story with some great twists and gimmicks, some insight about frustration and fixation. Some of the short stories gave me a kick as well, but reading him was always like drinking Miller Light when I would have been more satisfied with a good stout. More to the point, his style frequently seemed histrionic, cliché-ridden, smirky and juvenile; his humor adolescent, most of his characters filled in by crayon. But I’ve always admitted that I’d rather sit around a fire and hear him tell a yarn than listen to serious literary artists whose works tell me about myself, the language, our culture, the chords and textures of the human condition but whose personal conversation is often filled with professional gripes, self-promotion and literary gossip. Even when he’s heavy handed and repetitious, superficial, smarmy and spookyboo outrageous, King Stephen can spin yarns and plot plots. When I saw the 25% off sticker covering a corner of Glen Orbik’s deliciously garish cover of Joyland on the Wal-Mart shelf, I couldn’t resist picking it up. Once the image and the jacket copy made it clear that the setting was a carnival in North Carolina some forty years ago, I decided that it would be a perfect read (given my age and N.C. roots) for a couple of the three weeks I would be recuperating from a hip replacement.

I wasn’t disappointed in a couple of respects. Somewhat honorably, I was really pleased that the story stammered forward like a chain-drawn roller coaster car and that it was neither a stylistic embarrassment nor a purely superficial portrait of an amusement park. Joyland doesn’t seem quite real, of course – not gritty enough, too sparsely populated for an investigation into carny life – but it’s present as a credible silhouette with neon tubes, milling rubes and the cant of ride jocks and shills, present enough to provide the theatrical space for a coming-of-age novel for one of King’s standard modestly heroic but endearingly not-with-it (and Bradbury-nostalgic) protagonists. King deploys and fills in the standard ingredients he selects – ominous prophecy, broken-hearted hero, cavalry rescue.

My second level of satisfaction, less honorable, was that I found many of the predictable plot twists, King’s standard minor key naughtiness, flat redundancies and the absence of narrative weather and intricate character which are King’s signature. These are among the qualities which make him both a guilty pleasure to be read and an experience to be had quickly. It’s hard candy for young adults who aren’t sneak-reading the down-and-dirty adult lit, but it’s shrewd candy, too, and in Joyland there are no “rabid” dogs with super villain canniness nor cars trying to be HAL in an internal combustion Space Odyssey. It’s a novel in which the ghosts, though crucial, mostly keep out of view, and the late adolescent cast is both idealized and stumble-footed, the roughnecks just abrasive enough, the setting a twenty-year-old’s sweet dream of the proximate exotic. The improbabilities are managed fairly deftly, camouflaged, abridged. 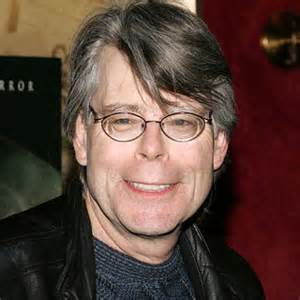 And then there are, in useful sequence and boilerplate familiarity: the dying boy, the beautiful single mother, the dog, the insightful but restrained old women, the kindly laconic mentor, the understanding dad, the vile villain, the wholesome goodies and a sequence of pretty unastonishing revelations. And, of course, the overwriting and non sequiturs that drove me away from S. K. to begin with, the tonal gaffes (“Mike’s wand of a neck,” “That dour flush of envy ran through me again, causing my stomach to clench around the food it was trying to digest. . .”). I have always believed King needs to hire a ghost editor, but the scuttlebutt is that he prefers not to.

I’m also a little ashamed to have enjoyed discovering the signs of arrested development in the author – an unfair rush to judgment, as he has produced many books I’ve never opened – but then King never claims to be a member of the guild that includes Russell Banks, Joyce Carol Oates, Margaret Atwood and Cormac McCarthy. Or does he? Thirty years ago, he seemed to enjoy being genre royalty, but with “genre” undergoing a revival and a makeover, he has been freed from quarantine. After all, there’s McCarthy’s No Country for Old Men, Oates’s many genre excursions, and evidently the wizard boy books fulfill the imaginative appetites of many adult readers.

Here I am suddenly, in mid-stream, finding myself addressing this light entertainment – somewhere along the lines of Robert B. Parker but far short of Elmore Leonard – as psychological realism with its commitment to character exploration and its obligation to imaginative modes of storytelling and the goal of artfully pitched sentences. Too much to ask of a man whose choice of a minor key to work in has been obvious for decades and who writes at breakneck speed and in such quantity? Certainly he’s a somewhat literary phenomenon; people study his work and write about it, but people study jai alai, too, without anyone beyond its zealots claiming it’s a major sport.

Worth noting: “the Talk,” as kiddo narrator Devin Jones calls the carny jargon, is persuasive, even compelling, being (as the “Author’s Note” insists) a blend of realistic carny argot and variations peculiar to Joyland. I hadn’t expected King to be this careful. However, outside the carnival, the North Carolinians’ diction, syntax and frames of reference don’t sound very different from King’s half century of Mainers.

One point I feel compelled to make. Fans of King often discuss his management of 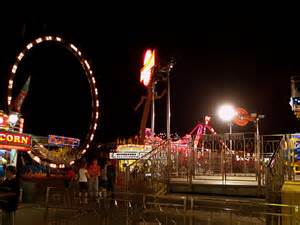 atmosphere, the eerie emotional weather the characters move in and which moves through them, everything ominous and spring-loaded, not quite oppressive but still permeated with dread. I didn’t find that in Joyland, though I should reiterate that this is no monster story nor catastrophic doomsday scenario. Of course, when the plot turns tense and something momentous is threatening to happen, the descriptive language turns purposeful, the images are creepier, the weather and general appearances somewhat threatening. But these elements seem washed out of most of the book, the sense of dread and tension falling slack when the characters are not actively in peril or speculating about malefactors. It really doesn’t feel sinister. Why is that? Partly, I think, due to the overall nostalgic ambition of the book. King wants us to love the time and the place, the callow season of life, and to feel that the murderous temperament which drives the plot is quarantined back in the early seventies and in that milieu is tamed by the music of the era, along with sexual naiveté, well-meaning collegians (who often seem like high schoolers), even though Devin must turn Criminal Minds profiler to solve the crime and despite the fact that the currently popular mode (on TV, in fiction and among real miscreants) involves violent crime against young women. The curiosity and fervor for resolution the likeable characters in this novel feel never seems very connected to the real and often less cartoonishly garish events in Joyland. The hound mascot costume seems to engage the author so much more than the dark streak in the characters or even the horror ride where a girl has actually been killed and her ghost may linger.

How to arrive at a stable conclusion from all this haphazard calculation and assessment involving an inconsistent (and yet predictable) narrative? Did I enjoy the reading of Joyland? Yes. Would I read a sequel? No. Can I imagine aspiring to write a similar but rougher and more originally executed book with a carnival murder story IF I had the aptitude for the extended narrative or the instinct or focus? Yes, I would do it (though not in the crudely realistic manner of Harry Crews, who knew that scene), for the fun and for the royalties, but even if I’m fated to undergo another joint replacement soon, no readers should hold their breath.