I found a dimpled spider, fat and white,
On a white heal-all, holding up a moth
Like a white piece of rigid satin cloth —
Assorted characters of death and blight
Mixed ready to begin the morning right,
Like the ingredients of a witches’ broth —
A snow-drop spider, a flower like a froth,
And dead wings carried like a paper kite.

What had that flower to do with being white,
The wayside blue and innocent heal-all?
What brought the kindred spider to that height,
Then steered the white moth thither in the night?
What but design of darkness to appall?–
If design govern in a thing so small. 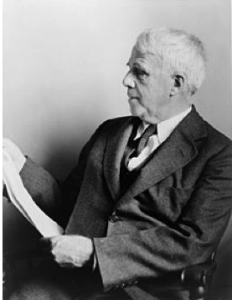 In this poem, Frost stumbles upon a curious scene in his rural surroundings. He observes as a spider kills an unsuspecting moth atop a peculiar heal-all – a common flower. Uncommon however, is the color of the flower, and that of the spider and the moth. All of these are white, and importantly so. Their color separates them from the rest of the picture, the more expected greens, browns, and blues of nature. The poet highlights the elements in white that he believes to agents in this gruesome “design”. On the whole, the poem questions whether the happenings of nature are governed by an intelligent force – and whether that force is malevolent. Frost reveals what he believes, to an extent, choosing to describe the scene as “death and blight”, and “ingredients of a witches’ broth”. Moreover, his choice to use a sonnet for this poem shows that Frost chose to be governed by another’s design. 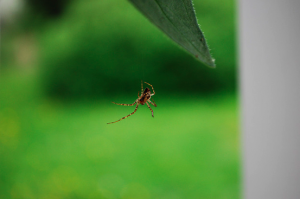 Robert Frost (1874-1963) was an American poet, both popular and critically acclaimed for his poetry describing rural life in New England, where he spent most of his life. His work uses these naturalistic settings to explore philosophy and make social commentary. Frost attended Amherst College and Harvard University, graduated from neither, and ended up receiving more than 40 honorary degrees from prestigious universities in the United States and England. When he was not writing, he taught at Middlebury College, Amherst College, and the University of Michigan, Ann Arbor. Frost won four Pulitzer Prizes for Poetry and in 1960 was awarded the Congressional Gold Medal for his work.