Calm yourself, here where the blue painted saint
in his wooden shrine
presides over the hillside. The mountain lion
they saw by the barn is not, as you’re convinced,
looking especially for you. Yet all you can see
is your own fear, projected on to his twitching tail.

Calm yourself, you who could not fight a dog
or outrun a rattler. There’s nothing to be done.
The world makes you no vow.
Flies want what you offer.
Pray all you like, carry a whistle around your neck,
march along the trail singing.
The hay is white and golden in the wind.
The thistles, crowns of thorn, with light on every sepal.

“No Vow” appears in Dream Cabinet (2012). You could see it as a contemporary response to Robert Frost’s 1936 “Design,” in which Frost questions the relationship between humans and nature and humans and a divine creator. “No Vow,” appropriately written in free verse, critiques the human need to control, concluding that nature has a sacredness that transcends our ability to overpower or understand it.

The poem begins with an apostrophe that seems almost as though the speaker is addressing herself. She seeks calm from anxiety and fear of nature, the “mountain lion.” She tells herself not to fear the lion’s threatening “tail,” but rather to acknowledge the whole “body” of what this fear actually represents: the fear of death. But in the second half, the speaker finds resolution from this fear, concluding that the world follows its own rules; perhaps there is no predestined “trail” or way to overcome death. Perhaps, though, art, like the “blue painted saint” (or like a poem) can provide solace from fear. 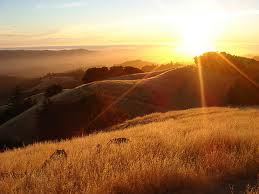 “No Vow” acknowledges the reality that while life necessarily involves fear, this fear cannot be reconciled by attempting to “outrun a rattler” or govern and attempt to make sense of the world. But take comfort in the purity of all that is pure, “white and golden,” like the hay, and like art. There can be solace in spite of the wind.

Ann Fisher-Wirth is a poet, scholar, and yoga instructor in Oxford, Mississippi. Her books include Dream Cabinet, Blue Window, Five Terraces and Carta Marina: A Poem in Three Parts. This year, she also co-edited The Ecopoetry Anthology, a groundbreaking collection of American poetry from Whitman to the present time, published by Trinity University Press. She has received many awards and accolades as well as eleven Pushcart nominations for her work, and she has held Fulbrights to Switzerland and Sweden. She teaches poetry workshops at the University of Mississippi’s MFA program. She also teaches twentieth-century literature and environmental literature and directs the University’s Environmental Studies minor.

Find Dream Cabinet and Fisher-Wirth’s other books on amazon.com.