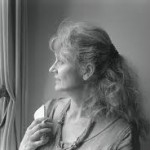 The night after the service, his sister appears
to him.  She is gathering her paintings
for the show her gallery promised: seascapes
like bowls of broth, moons like Camembert
wheels, chunked off and eaten.  Her life’s work!
She asks his opinion of this one, that one.
She says, “Nobody calls me.”
He says, “How can they?  You’re dead.”
She shakes her head: No.

The next night he sees her adding the last
brushstrokes to  green grapes
lounging on a white platter.
They walk among the paintings,
each with its title and price.
She says, “Nobody answers my calls.”
He says, “They can’t hear you.
No breath, no heartbeat, No coming back.”
She shakes her head: No.

The third night she stands at the foot of his bed
pleading.  She begs him to take the paintings.
Maybe he will have better luck.
Her death? They don’t speak  of it.
She says, “Take the days as they come,
the nights as they go.  Don’t forget me.”
He says, “How much of yourself you left behind!”
She says, “Look for me in the world I left
when the sun splashes its light on everything.”

Nancy Willard’s poem, featured in a recent issue of Shenandoah, shows how one may be haunted in a healthy and comforting way, how grief can be eclipsed by the specifics of memory and the trajectory of  a deceased loved one’s spirit can provide guidance.

Ms. Willard’s newest collection of poems is In the Salt Marsh (Knopf, 2004), and her recent book of essays is The Left-Handed Story (Michigan, 2008).  She teaches at Vassar.