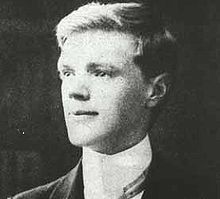 The dawn was apple-green,
The sky was green wine held up in the sun,
The moon was a golden petal between.

In “Green,” Lawrence conveys a woman’s loss of innocence, or virginity. As emphasized by its title, the central motif of this poem is the color green, which symbolizes the woman’s initial innocence and naiveté. The opening images Lawrence creates convey an ingénue’s perspective of her surroundings. The dawn is “apple-green,” the sky is “green wine held up in the sun,” and the moon is a “golden petal.” Nature gains a wondrous, fantastical quality through virginal green lenses.

In the second stanza, this woman is able to “[open] her eyes,” that become “clear like flowers undone.” In other words she is able to, “for the first time,” gain clarity in focus, as she has just been deflowered.

Lawrence therefore describes the loss of innocence as a positive gain, contrary to the contemporary societal mores he faced. According to this poem, experiencing true love or true passion can serve as a vehicle of clarity and truth; one can finally see the world, not through a shaded lens, but through an unobstructed vision of reality.

D.H. Lawrence was a controversial English writer, recognized for his significant contribution to the Modernist literary movement. Though his literary works went largely unappreciated during his lifetime, he has come to be valued as a visionary thinker and an imaginative writer.