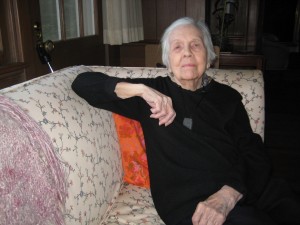 Widowhood provided poet Eleanor Ross Taylor a welcome retreat, the renewed pleasure of staying close to home, writing and reading, a time of review and reflection. Eleanor, widowed in 1994 at the age of 74, was married to noted novelist and short story writer Peter Taylor; he’d taught literature and fiction writing at the University of Virginia and in 1987 won the Pulitzer Prize for his novel, A Summons to Memphis.

Although Eleanor was a respected poet, Peter’s work was best known and most widely acclaimed. She’d published her first poetry collection, A Wilderness of Ladies, in 1960 at the age of 40. Her fifth collection, Late Leisure was awarded the Poetry Society of America’s 1988 Shelley Memorial Prize which honors one or two poets each year “with reference to genius and need.”

It seemed especially cruel that Peter, unsparing, garrulous and amusing, suffered a stroke at 75, it compromising his southern cadence but not his charm. He died two years later. After Peter’s death, Eleanor’s daughter Katie died of ovarian cancer in 2001. Katie had lived in North Carolina, and Eleanor had not seen her daughter for some years, a separation and loss that she could not reconcile. She remained close to her son Ross, his wife Elizabeth, and their daughter, Mercedes, in Falls Church, Virginia.

I looked forward to time with Eleanor, intensely private, candid and observant, as she would permit. We’d met in 1970 when the Taylors entered Ross in my husband’s new school. Five years later we followed their lead to Key West for a winter visit, our introduction to the renegade island where we would often return. Together we explored the flats, swapped books and ate cheap and tangy Cuban dinners at El Siboney and The Fourth of July. We talked easily around the table with Peter’s stories getting an animated run before put to paper. Eleanor, abstemious and restrained to his ebullience and conviviality, never missed aiming her own nimble salvos into every conversation.

Now I found quiet comfort sitting beside Eleanor on the sofa under the window picturing her tangled garden; a portrait of young Peter in white linen suit — reminiscent of F. Scott Fitzgerald –- ever present, framed above the fireplace. Dainty glass bowls overflowed with peppermints and chocolate kisses. Our ages came closer as we talked frankly of marriage, children and writing still to be done. At 87, Eleanor mentored even as she sought consolation; she confided and retreated, wrestling through unfinished dialogues with her husband and daughter. She replayed conversations she wished she’d had with Katie, blaming herself for putting Peter first.

I had hoped that Late Leisure — published five years after Peter’s death – would include poems of reconciliation, healing insights into Eleanor’s marriage and Katie’s death. I found none. Instead, many years after Peter’s death, Eleanor reread old journals, searching yet for new understanding of matrimony and her literary years. She studied notes from long ago summers with writers Caroline Gordon and her husband, poet Allen Tate, as well as years when Katie was a baby, and she and Peter lived in a duplex near critic and poet Randall Jarrell and his wife, Mackie. Eleanor and Peter’s literary circle also included poets Robert Lowell, Robert Penn Warren and John Crowe Ransom.

Eleanor found encouraging mentors in Tate and Gordon when she was their student at the Woman’s College, now the University of North Carolina at Greensboro. “They were wonderful to students, and Caroline particularly always said, ‘You owe it to young writers to help them.’ And she did,” Eleanor noted in a 2002 Blackbird interview.

Tate also taught at Vanderbilt when Eleanor attended graduate school there and introduced her to his friend Peter Taylor at his home in Monteagle, Tennessee. Eleanor and Peter married in 1943.

Later living in Greensboro, Eleanor asked Peter to introduce her to Jarrell, a poet on the Greensboro faculty whom she admired. Jarrell read her work, recognized her talent, and urged Eleanor to write and publish her first poems however torn she evidently felt between writing and raising two children. She recalled his prophetic words in a 1977 Southern Review interview: “Randall used to come and say, ‘Do you have any poems?’ and when I didn’t, he’d  say, ‘You’ll be sorry. God will make you sorry.”

When A Wilderness of Ladies was published in 1960, Allen Tate’s introduction praised Eleanor’s poems of “violent emotion” stemming from a restrained life.

The confidence shown her by Tate, Jarrell and others surely persuaded Eleanor to write with all seriousness. “I think that the continuing influence of people who believe in you can  help,” she said in the Southern Review, recognizing the tutelage of poet Frank Bidart while she and Peter lived in Cambridge, Massachusetts and Peter taught at Harvard. “Frank taught me how to choreograph a poem. He would talk for a long time about where he’d prefer to put a comma.”

However willingly or reluctantly Eleanor contained her writing career in favor of Peter’s and being wife and mother, her poems grew, showing the influence of other poets known for their lean and controlled emotional powers — Emily Dickinson, Elizabeth Bishop and Marianne Moore. “I also read Edna St. Vincent Millay as a teenager and fell in love with her poetry,” she said, perhaps a glimpse of her own controlled passions.

Eleanor was only nine when her first poem was published in The Norwood News and earned her a dollar prize. The youngest of four was born on June 30, 1920 in Norwood, North Carolina. Eleanor and her sister, Jean Justice, widow of poet Donald Justice, outlived brothers James and Fred, also writers. In Norwood the siblings were affectionately dubbed “the writing Rosses.”

The daughter of a devout Methodist and a Sunday school teacher, Eleanor, in her late eighties, still felt their influence.

I look at photographs of my grandparents, and sometimes feel I’m going forth for them. My parents were simple, dirt farmers. They went to church and my father read to us from the Bible every night before we went to bed. We were on our knees  at the table, or beside the fire. My two older brothers had to be called from upstairs and one sometimes refused to come down. Prayers were part of our daily routine and I found it comforting.

I keep a hymnal by my bed, and in the night, read the hymns and marvel at the depths of the beliefs that fostered them. The people who wrote those wonderful hymns were believers and there must be something if they could found that inspiration.

Eleanor was also reading William James’ 1902 classic, The Varieties of Religious Experience.  “I can almost believe now,” she said, “but the older I get, I don’t understand faith. At 87, it’s hard to think humans live and then it’s all over. So much is unexplained …Wonders. ESP…Things like that..And the Bible is about love…a loving God. Don’t you think? Love is the most important thing, isn’t it? Don’t you think sadness and depression in life comes from being unloved?”

Examining her past, Eleanor neatly stacked card tables with family photos and writing projects. She collected pictures of children reading as evidence of its early joys. A photo of Mercedes, now a college student, pictured her as a child, book in hand, under the Christmas tree.

Eleanor had also uncovered bits of “doggerel” which made her want to write more. “It’s been a long time since I’ve written a poem, but when one hits me, I write a line down. “In poetry, I think something comes out of you, your inner self, that can’t be expressed in  other ways. Don’t you think? Something you’re reaching for and give exposure to…Art is like religion in that way, reaching out…an empathy you’re not aware of…”

Jane Hirshfield’s Saved by a Poem suggests that poetry can be a form of prayer. If “art is like religion,” Eleanor implied that poetry and faith could provide us empathy, reconnection when needed most. “This morning I reread Gray’s Elegy in a Country Churchyard. I can understand it now,” she said. “I’ve seen everybody die. I can identify too with the country people. They remind me of people I grew up with. Gray was only 55 when he died. At my age, you don’t know if you have a year, nine years, or with people living so long, maybe more.”

One afternoon at Eleanor’s for tea, among them was a young woman eager to launch her writing career. Eleanor, demure in her gray cashmere cardigan, commented just above a whisper: “We start our careers, then sex becomes the most powerful thing in your life and you get married. It confuses everything.” She passed the chocolate cookies to silence.

Ever pithy and missing no nuance, Eleanor still restricted whom she would see, preferring to consider the world without apology within her own confines. “Solitude without loneliness,” as poet Adrienne Rich said. At home with the shutters snapped, Eleanor worked on her memories, politely resisting entreaties to hire needed help, a live-in companion or move to a “retirement community.”

Then Eleanor surprised me. She called in late January 2008 just before we left for Key West, saying she had the flu but wanted to say goodbye because she might soon move to an apartment near Ross in Falls Church. I didn’t believe she would ever leave her cherished home. Small and half hidden in her bright red bathrobe, Eleanor waved from behind the front door. She formally accepted a hug and watched as I drove away. When I returned, I counted on seeing Eleanor open the door, but found her house dark. She had made her move.

In 2010, Eleanor celebrated her 90th birthday. That year she was a finalist for the 2009 National Book Critics Award, and winner of the William Carlos Williams award for Captive Voices: New and Selected Poems, 1960–2008. Also in 2010, Eleanor won the prestigious Ruth Lilly Poetry Prize for lifetime achievement. The prize came with $100,000 and much acclaim for her collection, Captive Voices: New and Selected Poems, 1960-2008.

In presenting the award, Poetry editor Christian Wiman admired Eleanor’s work for its “sober and clear-eyed serenity…” He said, “We live in a time when poetic styles seem to become more antic and frantic by the day, and Taylor’s voice has been muted from the start. Muted, not quiet. You can’t read these poems without feeling the pent-up energy in them, the focused, even frustrated compression, and then the occasional clear lyric fury. And yet you can’t read them without feeling, as well, a bracing sense of spiritual largesse and some great inner liberty.”

Muted without being maudlin, a realist not without a streak of romance, Eleanor Ross Taylor still put forth her testimony to seclusion, life in the present, self-sufficient and rust-free.

I’m always constructing my own brierpatch.  True,
I’m still bleeding from the first canes I dug in;
they like barbwiring things in
as much as battling guests; that’s useful;

I won’t try getting out too soon, say for a
tipsy fruit, or reckless stroll.  What I don’t spend
on tickets I’ll apply to long-distance calls.
Hunters will come and shake my fence, dogs panting,
paws pointing.  I’ll like that.  I’ll cuddle up
and turn the page.

“The blackberry, permitted its own way,
is an unmanageable plant.”  Here’s a
variety called Taylor: “Season late,
bush vigorous, hardy . . . free from rust.”
That’s it.  Don’t let my brierpatch rust.

Eleanor Ross Taylor died on December 30, 2011 in Falls, Church, Va. She was 91.
Elizabeth Meade Howard has just completed a book on older mentors.