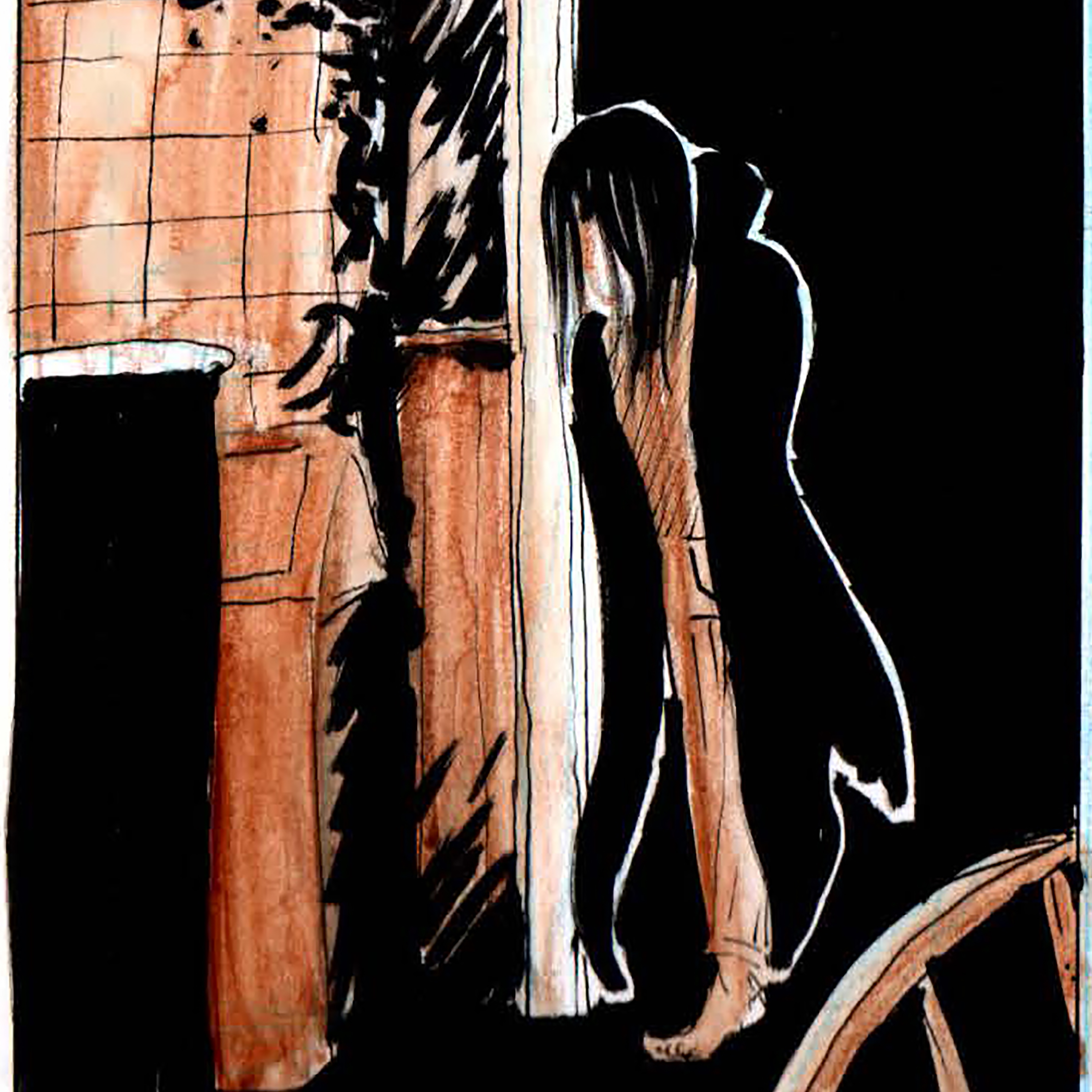 Rainie Oet and Alice Blank’s collaborative comic, “Wanting to Erase Her Share of the Darkness,” appears in Shenandoah Volume 68, Number 2. Chris Gavaler, our Comics Editor, talked to them about working together to create it.

Chris: Traditionally, multi-author comics have followed several production norms. Sometimes a writer develops and finalizes a script, including not just dialogue and captioned narration but also panel-by-panel descriptions of image content, and then the artist executes that script, deciding layout arrangement and other visual elements but remaining within the parameters of the script; if there are multiple artists, the penciller defines the page before handing it off to the inker, colorist, and letterer. Other collaborations place artists in lead creative roles. Stan Lee’s so-called “Marvel Method” required pencillers to do almost all of the narrative writing, leaving talk balloons and caption boxes empty for Lee or another “writer” to fill-in afterward based on the story content implied by the images. Still other collaborations are more fluid, with story, word, and image content developing together. How would each of you describe your collaborative process?

Alice: Well—the words are entirely Rainie’s. I think maybe once or twice there’s a slight grammatical shift just to account for where the word boxes will go, what they’ll be shaped like. Rainie showed me an early draft of the story, and we almost immediately started thinking of ideas for how I could translate it to the visual page. Our collaboration, I would say, is oriented around my initial sketches for what a page’s layout could look like, and often I’m explaining how that fits in with what I perceive to be the “message” or “point” of the poem. We try to work both on a textual level and a metatextual level, so we’re not just concerned with the contents of the panel, but the structure and ordering of the panels, how it relates to the reader’s experience and visual journey, and how that constructs the page. I’m often very wrong in my initial proposals. Rainie is supremely kind in deferring to my suggestions pretty often, but there are definitely moments where I’ve completely missed the point or misconstrued the narrative.

Rainie: When I wrote the book, or sometimes even before the actual writing of each section, I held a vision of what it looks like. When planning a collaboration on each section with Alice, I am trying to negotiate my visual ideas with her sophisticated visual imagination. It’s an amazing give-and-take, where I’ll suggest an image, then she’ll sketch out what the panels could look like, or suggest something that seems better, and we’ll come to an agreement about what the best result will look like. I am almost always inclined to take Alice’s suggestions, which are numerous and bold. She has a brilliant brain for graphic storytelling.

Alice: So, basically: before we work on a page based on Rainie’s script, we have a long, involved conversation where I provide the foundations for what I think will look good, and Rainie alters them based on their vision. We need the whole thing outlined before I can even start, so we can make sure the pacing works and the visuals cohere.

Chris: So you’ve referred to “poems,” “sections,” “narrative,” and “the book.” It’s interesting how those are synonyms and how they’re not. I would probably call “Wanting to Erase Her Share of the Darkness” a poetry comic, a term I find to be a wonderfully and intentionally under-defined category that encompasses a range of image–text sequences, including formally traditional comics with gridded panels and word containers, but that explore untraditional content in untraditional ways. Do you have a preferred category for you work—comic, poetry comic, sequential art, etc.—and to what degree do you consciously engage with traditions and genres as you collaborate?

Rainie: It’s a funny bunch of classifications. Poetry comic and graphic narrative are interchangeable to me for this work because I see the writing as simultaneously poetry and fiction. The book, Glorious Veils of Diane, as a whole, is a novel-in-verse or a book of poems. The in-progress illustrated counterpart is a graphic novel or a graphic poetry book. The way I think of the project as a whole is like my favorite card from Brian Eno’s Oblique Strategies: “What are the sections sections of? (Imagine a caterpillar moving).” “Wanting to Erase Her Share of the Darkness” is one such section. In both my noncollaborative writing and my collaborative work, I try consciously to disengage traditions and genres. It’s an interesting and tricky thing, the idea of unlearning, of being free from. I think the best way to do this is to become as aware as possible of the traditions and genres that we absorb just by being in the world, and then to try to hold that awareness while writing. When I do that I feel like I’m able to bring new ideas to a project.

Alice: I could definitely see talking about this work as a “poetry” comic, but I traditionally just describe my work as comics. I worry about differentiating distinct kinds of writing as different kinds of comics—there are plenty of abstract narratives that I think would blur the line between poetry and prose (and indeed the poem from which this is derived is an example), and I wonder at the sort of comics that get left behind when labels like “poetry” are added to the name. American comics are still burdened with the image crisis brought on by the Comics Code Authority. Bringing in the poetry label might differentiate this work from a colloquially understood superhero punch-fest, but I want to abstain from adopting terms that suggest my work is in any way separate from or superior to those forbearers. I want to play a part in the ongoing cultural project to elevate “comics” as a label past its Marvel-or-DC connotations, so I try to eschew words that shift my work away from the base term.

Chris: At Shenandoah, we’ve intentionally not defined what we mean by “comic,” partly in the hopes of attracting a diverse range of interpretations—and certainly “Wanting to Erase Her Share of the Darkness” raises the term above both the content and artistic norms of superhero comics. We were also excited by its inexplicableness, the way your comic begins mid-action and the dream-like logic of its events. Much of that effect is achieved by internal style and tone, but it’s intriguing to think of this piece as part of a larger work too. I was pleasantly surprised to hear you reference Eno’s 1975 system for music composition, but of course it’s all about collaboration and the creative process, including fitting smaller units into larger wholes. Can you describe the book script and how this section fits into that bigger picture? How much of the project is complete?

Rainie: Glorious Veils of Diane is about a child named Diane who, at some point in her life, disappears from the people around her, becomes a ghost in her own life. Prior to this, she projects herself onto and is deified by all the people in her life: her mother, the girl who lives across the street and is never allowed out of the house, her grandmother, her father, and others. She is obsessed with blood and the grotesque. She is ripping veils away trying to discover what’s behind the veils, only to discover that the veils are the thing the veils were hiding. This book is also very important to me because, though it started out as a reimagining of Diane Arbus’s childhood, it quickly transformed into a reimagining of my own childhood. Being nonbinary, and having been assigned male at birth, this book is a way for me to reinterpret the weirdnesses and terrors and divinities of childhood through a queer-gendered lens.

Alice: As I understand the book, it is very much invested in maintaining the mystique seen in “Wanting to Erase Her Share of the Darkness.” Even as a whole, the story rarely pierces the hazy, dream-like skin its wrapped in. But isn’t that just the way we remember our formative years? Anything else seems like wishful thinking.

Rainie: Glorious Veils of Diane (the un-illustrated version) is forthcoming from Carnegie Mellon University Press in 2021. The full illustrated version is in progress, but is being completed, section by section. This section, “Wanting to Erase Her Share of the Darkness,” is full-on Diane. Her obsession with blood and the grotesque doubles back on herself. She hurts and is hurt. She hides from who she is, then realizes she doesn’t know. It comes early in the book, and has lasting reverberations.

Chris: Would it be okay to see the script as you originally wrote it? It would be interesting to see how these comics pages actually began.

Diane’s Dracula cape catches fire as she dances round the bonfire holding hands with the boy she likes, and the boy tries to run and people are trying to tell her, but she doesn’t notice: she’s grabbed his arm, pulls him close to lift off his glittering venetian mask. He pushes his palm into her neck. She spins him around and he trips into the burning end of her long cape, and he used hairspray so runs into the trees with his head on fire, screaming—Diane watches him diminishing through a photo-square of her fingers. A kid throws a bucket of apple water on Diane, her grandmother’s black shirt sticks to her body, she crosses her arms over her chest. Two kids push her back and forth, ripping at her arms. Drenched, barefoot, she jumps through the side of the fire with a loud hiss, escapes through the woods.

Home, she microwaves a soaked towel, wraps her face in it, stumbles up the stairs to draw a bath. Tracking mud, she knows—she can hear her soles’ sticking slap on the carpet and tile. She undoes her grandmother’s shirt, button by button, peels everything off except the towel on her face and sits in the tub. Shivering, she waits for it to fill. She hears her mother calling her name, as if moving from room to room before each guttural “Diane!…” Diane takes off the towel and sees she’s on her period, sees it slipping, mixing into the muddy water. She shudders (Diane!… Diane!…) and folds herself down, over her outstretched legs, as low as she can go, so her eyes are under the water, open. She waits for the water to cover her ears. She knows how to hold her breath for a long time. It’s almost there. And, there. She can’t hear a thing but her heartbeat pounding the water, and the roar of the water itself, like the roar of the fire. Diane’s pulled up by her hair, her mother crouching at eye level, the bathroom door off its hinges, light spilling in. “Diane,” her mother says, “who are you?”