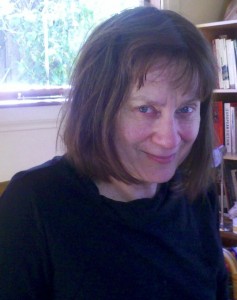 Frankie McMillan is a short story writer, poet, and creative writing tutor at the Hagley Writers’ Institute in Christchurch. She is the author of The Bag Lady’s Picnic and Other Stories and Dressing for the Cannibals, a collection of poetry. In 2009, she was the winner of the New Zealand Poetry Society International competition.

Frankie McMillan – we three
and almost there, the long gravel road, headlights sweeping the paddocks and he slows and says this is not working out and I say, sweetheart we are almost home but we both know it’s not really his home; he’s in a caravan while up on the hill my husband and children sit in electric light and I say, can’t it wait, and he says get in the back and I say this is not funny, and he pulls me from the car, a big fat moon in the sky, you fuck him all week he says and I hit him, get into the back he roars opening the door and possum traps and skinning boards tumble out and we struggle, his long hair in my eyes and I feel the gun under my back but maybe it’s a rifle but I don’t know anymore and far off my daughter practises her flute, the baby needs a bath and my husband peers into the night like he always does and if he peered a little harder he’d see to China which is where the man flees where my language will never reach him, where he will pedal through rice paddies, a bag of wool on his back, his memory short clippings and only in the next village a wife-to-be who teaches mathematics and if you calculate the odds of him finding her they are good but when my husband waits by the window he does not know this comfort, and when I open the door he is a statue and the children a frozen tableau on the couch, they thought they heard a scream, a terrible scream from the woods, but I laugh and say it was only a weka, my darlings, only a weka.

Note: A weka is a New Zealand native flightless bird.

2 Responses to We Three