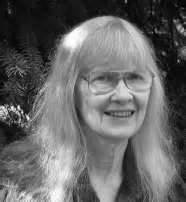 Judith McCombs is the winner of Shenandoah‘s 2012 Graybeal-Gowen Prize for Virginia Poets.  Her work has appeared in Poetry, Measure, Poetry Northwest and Prairie Schooner, as well as five of her own collections, most recently The Habit of Fire: Poems Selected & New.  She teaches workshops in Bethesda and arranges a reading series in Kensington, MD.

I spoke to her bent head, her clenched, gloved hands:
We’d test the sign she brought, then find amends.
We watched as the strand of hair left in her bed
Curled wormlike, snakelike in my flame; then shriveled,
Fell. So the spurting seed she’d felt within
Was proved false dew, I said; could never quicken
In her mortal wame. She started then—the gleam
Of her wide eyes met mine. I spelled a name

For some long-past minister of her present manse
Whose spirit found her bed: a pious man,
Who held his wife most dear, but secret grieved
No son was spared to them. Not one of three
Breathed long, and so his father’s ancient name
Was lost amidst a host of gabbling names.

She sighed, but kept her hand upon her purse:
But if ‘twere a devil come–could she be sure?
A devil’s hoof would tear her bed, I said;
But if he be your lord, or like enough, his seed
Is meant to thrive: I see he’ll be some pious man
Who’ll sire a son, some gentle human man.

She smiled, and stood. The purse she slid to me
Was two coins scant. This was not the bargain we
Had made, I said; without the herbs I’d culled,
What chance? She scowled, and from her bodice pulled
A small child’s ring, from her mother’s sister’s kin,
Inset with stone, that her lord had never seen.
The stone was dull, the metal bent, but true:
I gave into her hands the salves I’d brewed.

[from a sequence — based on parish, clan and social histories —  in the voice of 17th century sorcerer in Scotland’s Central Highlands]