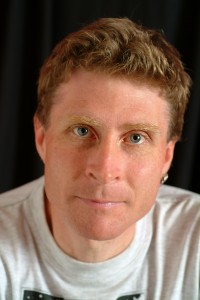 James Brown’s fifth collection of poetry is Warm Auditorium (Victoria University Press, Wellington, 2012). His first collection won the 1995 Jessie Mackay Best First Book of Poetry Award, and he has been a finalist in the New Zealand Book Awards three times. He is the author behind a useful nonfiction booklet called Instructions for Poetry Readings and, in 2005, edited The Nature of Things: Poems from the New Zealand Landscape. James teaches the Poetry Workshop at the International Institute of Modern Letters at Victoria University, and is part of the Writing Team at Te Papa, New Zealand’s national museum.

That when Julie phoned, late at night, you cried out like a wounded animal.
That you crooned ‘No Julie’ and ‘Oh Julie’ over and over,
until the words caught up with each other and turned
from tigers into butter.

That it was only a month before the due date, so that in everyone’s head
the baby had already arrived and was sleeping peacefully in the blue bassinet
beneath the brightly coloured animal mobile.

That Julie knew something was wrong because the baby had stopped moving.
That the doctor said yes, something is wrong, the baby has stopped living.

That Julie had to carry it inside her for three days before they could induce her.
That she had to go into labour and give birth in the usual way.
That you were still to be her support person.

That, on the day, you went off into the impossible waiting,
then came home for dinner, eyes puffy and dilating,
until the second phone-call came.

That the labour went as if scripted:
‘Once things get going, they often happen quickly.’
That Julie was terrific and pushed the baby out.
That when it appeared, Zac said ‘It’s too quiet in here.’

That Julie held the baby. That she played with it.
That you and Zac held the baby.
That it was almost like a baby, except, you said afterwards,
it was so dead.

That, as requested, you took photos,
which would later show how dead.
That blueness.

That you went into the corridor to give Julie and Zac space
and, sitting with your cup of tea, you could hear
a heartbeat monitor from one room and,
from another,
Julie
sobbing and sobbing.

That you got home about 6 a.m., but still went into school and taught all day.
That Julie and Zac went home to their house filled with baby stuff and flowers.

That for you, having had two homebirths, it was the opposite of what a birth should be.
That your mind got you through it – shut out the word ‘macabre’ till later.

That it was the worst night of your life.

That the funeral was as can be imagined, so it was good to get out
to the tiny gravesides and feel the air sting our faces.

That the autopsy could find no reason.

That Julie’s best friend was also eight months pregnant,
and a month later gave birth to a healthy baby girl.

That Julie has a floppy mummy-tummy.
That she cried when she got her period.

That, for Julie, Milly-Rose had been alive in the world because
how can you blame the longing for a baby?

Note: I acknowledge Alison Townsend’s poem “What I Never Told You About the Abortion” in The Best American Poetry 2006, the form of which provided me with a way into difficult material.