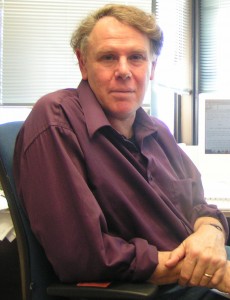 Harry Ricketts teaches English Literature and creative nonfiction at Victoria University of Wellington, New Zealand and co-edits the quarterly review journal New Zealand Books. He has written or edited twenty-five books, including a biography of Rudyard Kipling, nine collections of poems, extended personal essays and various anthologies. In 2010, he published three books: the anthology The Awa Book of New Zealand Sports Writing, 99 Ways into New Zealand Poetry (with Paula Green), and Strange Meetings: The Poets of the Great War, a group-biography of a dozen World War I poets. His most recent collection of poems, Just Then, was published in 2012.

(for Tommy and Maddy)

Here’s the track. Below left, the Tukituki
ribbons away; to the right, scalloped

greedy for distance, like the imperial
imagination some would have it.

Perhaps. Nothing simpler to patronise
than the past, that foreign country where

they persist in doing things differently.
Tommy lopes on; Maddy frames a shot.

A single bee struggles over clover
as the wind slickly backcombs the grass.

Here’s the top. Draw breath. According to the plaque,
the peak is “the huge bite that choked

Rongokako” when challenged to “eat his way
through the hill” or, more prosaically,

“a ‘hog-back’ ridge of erosion-resistant
limestone dipping sharply to the west.”

An exaltation of larks soars above; Guns
‘n Roses throb from a four-wheel drive.

Note: The poem records a walk with my son and his girlfriend up Te Mata Peak in the Hawke’s Bay district of New Zealand. The Tukituki is the river you can see below you. Lines 8-9 refer to the famous opening sentence of L. P. Hartley’s novel, The Go-Between: “The past is a foreign country: they do things differently there.” Te Mata O Rongokako was a legendary Māori giant who undertook a series of impossible tasks to try to win the hand of an enemy chieftain’s daughter; eating the hill is said to have been the task which finished him off.