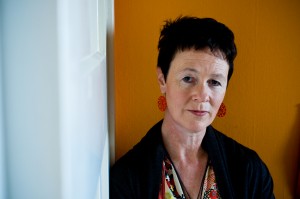 Chris Price is the author of three books, including the award-winning Husk and the genre-defying Brief Lives. She has worked in publishing, as a Landfall editor, and as a long-term coordinator of the New Zealand International Art Festival’s Writers and Readers Week, and now teaches Creative Writing at Victoria University, Wellington. Current projects include a creative nonfiction book about the nineteenth-century English poet, anatomist, and suicide, Thomas Lovell Beddoes, and the Transit of Venus Poetry Exchange, which was recently presented at the 2012 Frankfurt Book Fair, where New Zealand was country of honor.

Additional Information About the Transit of Venus Poetry Exchange

Chris Price – Possession no. 33
I was dusting my head with my hair
when the jaw shot out
of my filing cabinet
with a clack of dental
castanets. Someone was pulling
my strings. Then my legs
began to jitter as if bats
were harnessed to my knee-
caps. It was the ague,
the grippe, the palsy,
the plague – some old
disease, its visiting hour
come at last, had me
in its talons. I will not say
what I said – a dangerous
curse best left to rattle
in my head – but finally
St. Vitus lay down and died, and
I pulled him from the wound
in my side and stained
the paper red. 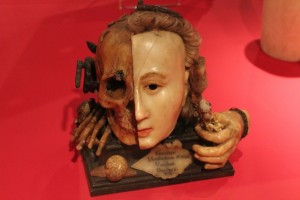 Note: ‘Possession No. 33’ was written in an overheated New York apartment in November 2011, a year when I spent a lot of time in anatomy museums and other museums of medical history in the grip of an obsession more politely described as research. The photograph shows an object displayed in an exhibition at the Wellcome Trust, London.

1 Response to Possession No. 33