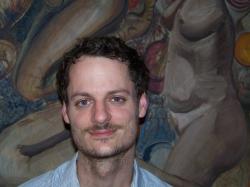 Hailing from Alabama and Georgia, Austin Segrest is a PhD candidate at University of Missouri and poetry editor of The Missouri Review. His poems appear in The Yale Review, New England Review, The Threepenny Review and many others.

Rugged individualism? Sure,
but long gone corporate, plus the Dutch
and French, and the Spanish before them
settling around the ports and islands.
For many years the enterprise is reliant
on native shipments and trade with natives.
Forests and swamps, scalpings and mosquitoes
conspire against the farming—of what, now?
Roughnecks and thieves
call the handful of available women
unspeakable vamps, begging the governor
to write on their behalf for more,
preferably attractive ones, to be shipped,
stealing off in the meantime with squaws.
Liquor, yellow fever and gain,
and a fort changes hands with a peaceful surrender.
Another decays at the edge of a swamp
as tribe displaces tribe on a northeast trajectory.
Crossing rivers is a dangerous business,
but rivers are highways, the only convenience,
for which, if not the season’s strictures, or a rain
of arrows, then some government
exacts its due. Evangelizing
in the waste thicket couldn’t seem more ridiculous.
Treaty and intrigue, peace pipes, trifles
and the shared black drink. Handsome clear
rivers cloud. Hunting grounds
are hemmed, speculated: hunting camps
in the modern parlance. The axe resounds.
It ends twenty years short of its writing,
capriciously with friends of Napoleon
thrashed off the coast in a heavy gale,
governed by an obsolete chart,—
a state of peril would seem to be the point.

1 Response to Pickett’s History of Alabama