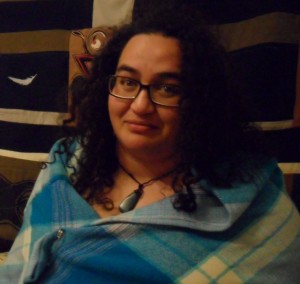 Maraea Rakuraku descends from a rangatira who collaborated with his siblings to kill his older brother, so he could take over leadership of the people – that’s her Tūhoe whakapapa. Then, there is her mother’s side – Ngāti Kahungunu where she descends from a notorious womanizer. All of this genealogy plays out as she negotiates modern day Aotearoa as a proudly indigenous woman. Maraea is a playwright, poet, short story writer and broadcaster. Currently, she is working on a Young Adults series, Kaimanawa, and novel, Te, as well as, let’s face it, the hundreds of other stories churning in her head.

Towards the Nanny
Planting her kamokamo
By the lavender

Scarved youth pass by
Swaggering with bravado
Avoiding your eyes

Gingerly I step
Over the coca cola
Smeared in dog shit

Note: Mooloos is my brother’s nickname for Murupara, a predominantly Māori township located in an isolated region of the Bay of Plenty, Aotearoa New Zealand. Built in the 1950s to service the burgeoning forestry industry, Murupara has slowly over the years succumbed to a slow death by a million cuts. Government policy in the 1980s, central government disinterest, and growing unemployment have aided its deterioration. With this comes all manner of socioeconomic tensions and it’s not unusual to find extremes of wealth and poverty existing within the same family.