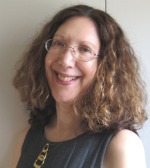 Nancy Naomi Carlson is the prize-winning author of two chapbooks and one collection of poetry. Her work has appeared or is forthcoming in such journals as AGNI, The Georgia Review and The Southern Review. She is an associate editor of Tupelo Press and an instructor at the Bethesda Writer’s Center.

That blessing of salt—
chlorine and sodium ions bound
like bodies in love.

A desert I held in my hands.

Once I sprinkled salt on a magpie’s tail
to keep it from flying, but fooled
by its mournful, mirrored, lake-lit self,
it gathered away on a current of wind,

song hurled against a hunter’s moon.

If you want a lover returned, it’s said,
burn salt for seven days,
but if it flares into flames you’re doomed
to pick every grain out of hell when you die,

like Persephone, feeling the pull of spilled
and broken things, or Lot’s wife,
still unnamed,

from whose tears,
I believe—not the pillar—the Dead Sea arose,
Sodom and Gomorrah below,
so much salt a body floats away,
really no effort at all.