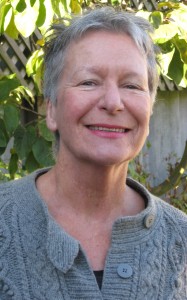 Bernadette Hall is an award-winning writer of poetry and also of short fiction, an editor and a teacher. In 2011 she taught an MA class at the International Institute of Modern Letters, Victoria University, Wellington. Her ninth collection of poems, The Lustre Jug (Victoria University Press 2009), in which she explored her Irish heritage, was a finalist in the New Zealand Post Book Awards 2010. She edited the online anthology Best New Zealand Poems 2011. Poetry has taken her to the Iowa International Writers Program (1997), to Antarctica (2004) and to Ireland (2007). She performs her work regularly and gets much pleasure from collaborations with composers and with artists. She was an interview of Bernadette appears in Turbine and she appears on the New Zealand Book Council website.

There’s mist like a frost net stretched over the paddock.
The grain’s been cut and the baler has done its work.
Now it’s time to set the paddock alight. Smoke
drifts across the motorway. As usual we’re praying for rain.
Did you know that in Roman times there was a big
square opening in the roof of a villa urbana?
There were little spouts all around the edge of it.
When it rained, the effect was of a waterfall pouring
down inside your house. Pliny the Younger
described something like this in one of the love-letters
he wrote to his beautiful new young wife
(the old one had died). He described the drainage holes
in the floor as well and the compluvium, the underground water
storage tank. You’d have to presume she was interested 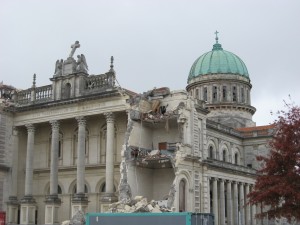 Note: In 2003, John and I shifted from Christchurch, our home for 23 years, and moved 50 kilometers north to a tiny “hobbit-house”  at Amberley Beach. Just three minutes walk to the wide sweep of Pegasus Bay. Our portion of sea is not all that safe;  you’re best to swim only at low tide. Inland, the Waipara vineyards stretch towards high country farmland beyond which are the Southern Alps. My recent work explores this rural, beachy space. In 2011 Christchurch suffered a series of major earthquakes. Tragically, 185 people died. The inner city was devastated. I’m noticing  the theme of domus  (Latin: home) in much of my new work.

1 Response to Life and Customs