In Corners, Under Frames 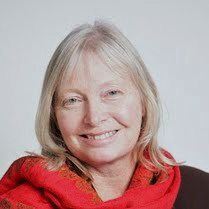 Kay McKenzie Cooke is the author of two poetry books, Feeding the Dogs (Otago University Press, 2002) and Made For Weather (Otago University Press, 2007). Feeding the Dogs was awarded Best First Book of Poetry at the New Zealand Book Awards, 2003. She is currently working on her third collection, Born To A Red-headed Woman. She lives in Dunedin, New Zealand. Her personal website is “By The Bay”.

Kay Cooke – in corners, under frames
It concentrates, this house, straining with the effort
to remember it once had a green roof
and a garden full of pink phlox.
It’s my mother-in-law’s childhood home

now remaindered as a holiday house
and empty most of the year. She remembers
the tin sheet hammered over the window-frame
after the glass broke, how the wind howled through.

Seventy-something years on and three owners later
we’re here on a day stoked with autumn,
invited to look around.
My mother-in-law notes the things that are the same;

the rotund hot-water cylinder like a rolled-up sleeve,
the wardrobe, its sweet metal catch. A brass hook.
“After coming back inside from the farm,
Pop would hang his coat on that very peg.”

As we look around, the present owner’s foxy
snuffles and whines at the smell of mice
behind the skirting boards. Outside
there’s a persistent view of rocks, tussock

and the lake, of the pear tree with its back to us,
huge and self-important.
The owner tells us that it was in the ’70s
when they first looked at this house.

On a bitter day of snow, she said.
She remembers the sputtering open fire
with two sticks for fuel
and the man and woman desperate to sell,

shivering with the disappointment
of dead strawberry plants. As she describes it all
she points to things unseen,
in corners and under frames.

“I remember it well,” she said,
“The man sat at the table, right there,”
she outlines its shadow, “right there,
eating Weet-Bix with gravy.” 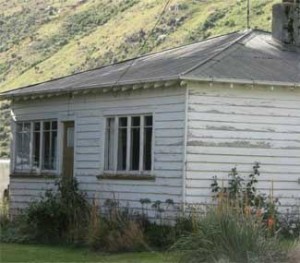 Note: Sometimes a poem just falls out of an actual occurrence described verbatim. My mother-in-law had long wanted to visit her childhood home in Kingston, a small town at the southern arm of Lake Wakapitu. When the chance came to do so, we took it. The surge of memories for her was overwhelming. It was a special thing to be there with her and to be able to place her as a small girl living in this house, nevertheless the most striking image I took away with me was the extraordinary (if unpalatable) one of the man eating a plate of breakfast grain with gravy.

4 Responses to In Corners, Under Frames