Heading Out to Wonderful by Robert Goolrich 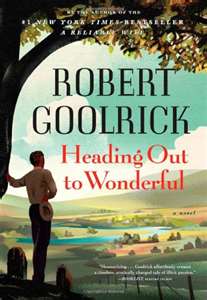 Many readers and reviewers have embraced Goolrick’s novel for, I believe, its unashamed romanticism, the unwavering through-line of its plot and the enthusiasm of its lyrical interludes, such as, “The river water, the sweet Maury, so fresh and clear, still leaping greenly, the water that flows from the eye of Jesus into the heart of God.”  My response to the book was disappointment, tinged with irritation, because I saw a more fiery and instructive story beneath the smoke of his prose.

The narrative follows the oldest and most reliable path: a stranger (Charlie Beale, an artful butcher) comes to town, shyly insinuates himself into its affections, attains heroic stature, deploys his mysterious riches in generous fashion, then pursues an outlaw passion which both reader and townspeople can see is in obedience to a higher law.  But the object of his affections is married, and earthly rules apply, so she is forced to betray him.  The town turns its back, and he suffers with some stoicism until his passion bursts forth again, this time in savage fashion.  And Ishmael alone is left to tell the tale.

Ishmael – actually Will Haislett – is the one real complication in the story, as he’s a small and innocent boy who becomes not only Charlie’s companion but his co-conspirator.  Why the reader is supposed to 1) believe in the extremity of the bond, 2) be untroubled by its dimensions from the start, 3) continue to sympathize with the benign but negligent parents and 4) feel any resonant tension upon the confirmation at the end that Will has been the teller of the story all along, well, this is a mystery to me.

But a less intricate and more peculiar mystery surrounds the suitcase full of cash with which Charlie buys up huge parcels of land and houses and whatever is needed by anyone he befriends.  From the very outset, the reader wonders where the money came from and who’s going to steal it.  It really seems to come from necessity – it allows Charlie to spend bundles on his beloved star-struck “hillbilly” – might as well say it – Sylvan Glass, but it’s never in jeopardy.  Like the appealing moral calculations Charlie makes in his journal, it quickly ceases to be an object of consideration, just as the journal writing stops once the passionate but completely conventional love story gets rolling.

Heading Out to Wonderful features a series of predictably attractive attitudes and devices – race-blind principals, a smart and crafty African American seamstress, hypocritical churchgoers and ministers, baseball, a faithful dog, a sleepy town awakened and then shocked by the operation of operatic emotions.  It’s Southern and Appalachian location adds some color, but not much culture (though songs and hymns are skillfully interwoven into the tale, and even Doc Watson is mentioned).  There’s not much work, aside from Charlie’s butchering and some carpentry, and most of the citizens of Brownsburg seem created only as quaint spectators who just go to the green room when they’re not employed as walk-ons.

The lingering question about this novel is whether readers are meant to be coerced by Charlie and Sylvan’s reckless coercion of the boy, who is made to share secrets too weighty for his years.  But this strange triangle is the source of the novel’s shock – the sin, betrayal and bloody revenge, plus the collateral damage.  If it’s fair to say that a writer should lead the reader to be curious about the protagonist, then to care for him, then to be concerned and even worried for him, I think this one fails, partly because Charlie’s mind is not very intriguing and partly because I’m too worried about Will in a knee-jerk way almost from the beginning, and though the story is about Charlie’s actions, the vulnerable Will is somehow the center of it.  But what of Ishmael and Nick Carraway, narrators who are spectators to the grand action but still the riveting psychological focus of their narratives?  From the opening sentences, that pair’s perspective and language become prominent, but Will is just a special and confused little boy who does not tell nor, until years later, understand the story which is the storm that tosses him.

Although seeking the connection between an author’s stated process and his text is at best speculative and often futile, in this case, it may be fruitful.  Goolrick has repeated in interviews that the novel’s plot and characters are based on a true story he heard, the most fascinating story ever, and that he’s repeated it often.  As I read, I could not escape the feeling that he had the events locked in his mind before he created characters to act them out.  Those denizens of Brownsburg move the plot, accomplish the tasks, fulfill the sequence, but they seem to be almost ruthlessly simplified constructs, formed with only the components necessary for the big movements of the book: shy but beneficent stranger’s arrival, his revival of a town, his heroism, his fall from grace due to ungovernable passion, his despair, his unthinkable violence, the sad aftermath.*

I’m not convinced that, even without allowing the characters to grow as complex thinking people, Heading Out to Wonderful couldn’t have been an artful and powerful story, but its unnuanced sequence of events and two-dimensional principles are readymade for a novella, one which would lack the redundancy and feature understatement instead of gushing emotional prose.  If the characters and actions are to be simple, the language needs more governed ingenuity, allowing Goolrick’s moments of sharp and surprising psychological disclosure and imagery to carry the story.  He needs to trust more in the visceral and rhythmic aspects of his imagination – “The house smelled like bacon fat and laundry detergent and bacon fat.  The people smelled like bacon fat and pig sweat and sweat,” – and less on the hasty and lazy impulses that result in, “Charlie’s brother appeared out of nowhere,” or, “You remember a little thing clear as a bell.”

1 Response to Heading Out to Wonderful by Robert Goolrich