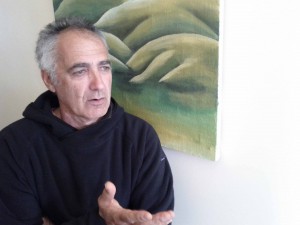 Rob Hack, poet/handyman, born in Invercargill in 1953, writes about his Cook Island heritage his early years on Niue Island, his several forays into Australia, social issues, media, other poets, places and people, often with wry humour. He reads at bars and cafes around Wellington. Some of his work appears online on the Whitireia website, in 4th Floor, and in Victoria University’s 2011 online journal Turbine.

It is tea time, the wind is hard and cold,
I run, head down, up Champion Street.
Two things to remember, two things to get,
Small tin of peaches, half pint of cream, don’t forget!
Then the lights of the Four Square store.
Inside lolly bags hang in rows. In the cabinet
blackberries and raspberries, licorice straps,
gobstoppers, two for threepence. In my hand
hot with holding, a florin and a sixpence. If I get
a quarter pint of cream there’ll be money left over.
I fiddle with the money in my pocket, look up
at the lolly bags, a man with a manager’s badge
is in front of me looking down.
Let’s see what’s in here shall we mister!
He jerks open my raincoat, a button flies off,
I go back and forth in his hands, he reaches in
the pockets, pulls the coat this way and that.
He huffs, walks away, rubs his hands together,
chilly out there isn’t it? to a lady coming in.

Outside it is cold, I stand for a long time,
tuck in the coat where the button has gone,
walk home. My mother taking plates out of
a cupboard, what took you so long? where
are the peaches? what’s the matter?
She bangs the plates down. I tell her,
put the money on the bench. It sticks to
my hand. She pulls out the tucked in part
of the coat where the button was, her eyes
go big, she turns, yanks the knife and fork drawer out,
it crashes on the floor, snatches up the
rolling pin, marches to the front door, yells
my father’s name twice. He hurries after her.
My brothers now beside me in the hall.
Voices outside. We go upstairs to our bedroom
close the door, switch on the light, sit on the bunks.
The front door closes. The knife and fork
drawer is put back in. Then my father’s footsteps
on the stairs. He comes in, rubs my head,
It’ll be alright, and gives us all a lifesaver.

Note: In 1963, after living for six years on the South Pacific island of Niue, our family returned to New Zealand and lived in Cannons Creek in Porirua, a state (i.e. government built) house district. The initial incident was probably due to shoplifting in the area. I never forgot how the manager could instantly “move on,” whereas I felt numb, or my Cook Island mother storming out clutching the rolling pin, and of course the crash of the knife and fork drawer on the floor (I thought I was about to get a whipping).