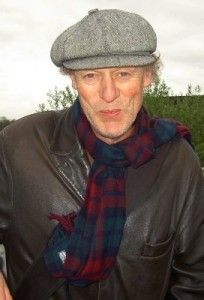 Cliff Fell is the author of two collections of poems, both published by Victoria University Press, of Wellington: The Adulterer’s Bible (2003) and Beauty of the Badlands (2008). He is the recipient of a number of awards, including the Jessie Mackay Prize in Poetry. He lives on a small farm near Motueka in the upper South Island and teaches creative writing at Nelson Marlborough Institute of Technology.

He believed in the dust that was beaten
from rugs, how it became
the stars of the Milky Way,
and he would share the last hours of animals
with his uncle the butcher
who played to them on the violin.

And he knew the tyranny of perspective
will kill us all
and that even the chairs get bored
in Vitebsk,
from sitting alone
in the courtyard all day.

So, stay here with your herrings, he said—
my concern is with movement,
with the paradise lost of childhood
and absolution of Art and Love—
though when Bella died
the world went dark before my eyes.

But we all need to copy what we already possess
and so he remade on the canvas
the lack of alcohol,
the reality that lies beyond
the shadows at play on the wall,
the images and forms that we like to say

are simply those who are passing us by.
So where are you going,
Mr. Oxcart Man, with your creaking wheels
on the old dirt road?
Will you make it through
to the seasons of another year?—

And play out its days on your violin
as you fly
to the farm where a goat and horse still graze
and the poet reclines
beneath a lilac sky
waiting for the evening stars to appear.

Note: “Chagall in Vitebsk” is based partly on notes scrawled during a cinema viewing of Chagall, the 1963 short documentary directed by Lauro Venturi. The final stanza references Chagall’s early painting “The Poet Reclining,” from the sequence known as “Scenes from Vitebsk.” The painting, images of which can be found on the internet, entranced me when I first came across it in the Tate Modern, in 1970, aged 15, and – probably for the enigmatic insouciance of the subject-matter – set me firm in my youthful resolve that poetry was the only career worth pursuing.

0 Responses to Chagall in Vitebsk