Caveat lector: I seem to be in a meddlesome mood.  And from the starting gun, I don’t want you to think that I’m recommending this book for the reader primed for precise and evocative, character-driven fiction, though there are moments when one imagines John Hart might have some interest and ability in that direction.  I’m writing about The Last Child because (1) it was so well received (2) it seems representative of a rampant impulse in current fiction & (3) it poses a serious question: how do publishers manage to promote such thrillers, with impunity, as highly skilled and provocative writing?

I almost bought a copy of Abraham Lincoln: Vampire Hunter a couple of weeks ago, but I already had a copy of TLC, so widely praised (a New York Times bestseller, starred reviews in Library Journal and Booklist), and I figured I should work further into my “to read” list and not add to it something from the current undead mania and likely to irritate and frustrate me. Do I need to say here that “entertainment” isn’t an accurate description of the ore I’m mining for when I do my “leisure reading”?  Snobby, I reckon, but by no means am I immune to the skillful thriller or sprawling excess of a historical novel, though I like to know what wood I’ve entered as I begin the trek. TLC was advertised at “Huck Finn channeled through Lord of the Flies” (so saith The Washington Post), and that appealed to me, though I eventually concluded it was more like Tom Sawyer meets “The Ransom of Red Chief,” with a strong dose of Stephen King. But “more matter and less art,” right? Here’s my beef.

How to distinguish between “plot driven” and “character driven”? In the latter, the most significant revelations are about what this or that character IS, who he/she IS. The enterprise runs even deeper than “motive” or what (God help us) profilers discover. The real investigation I’m drawn to is the nature of human nature. Certainly what the character DOES is crucial; if Huck decided he should help Jim but just dilly-dallied and lollygagged but didn’t act, well, road to hell paved over again. But it’s that process of learning about the rapacious and unfair side of the human animal that makes Huck question himself and the conventions of his community. (He doesn’t actually have to GO to hell for right reason and action; but he has to be willing.)

And TLC is rife with characters – the obsessed rogue detective, the obsessed aberrant boy, the missing angel child, the irresponsibly drugged-out mother, the twisted cop, the abusive and arrogant rich guy, the weak sidekick, the good-hearted but dull African-American giant, pedophiles and pervs of all stripes. If you want types, Hart (who names his detective co-hero “Hunt”) supplies them with commendable generosity.

And the good thing about types is that their actions can be shaped and(even more important in a mystery) timed to fit the outline.Every character is built upon two or three vectors, so they will sit and fetch and beg on command. So these two irritants come together: Reader really knows all about these people a quarter of the way through the book; Reader sees their calendars dovetailing perfectly to fit the outline.  When a girl is abducted exactly one year after another missing child incident (which turns out not to have been an abduction), her vanishing and re-emergence trigger a manhunt which discloses many remains, mostly children (too much CSI, etc!). Coincidences run amok.  Boys in danger and dangerous villains and rambling cops all seem to be listening to a higher power which frequently says “converge here now.”

I’m going into overtime myself. Quickly, two other disappointments. First, the author employs shifts in point of view for expediency and not dramatic or structural necessity, and he seems to have no strategy, no overall shape in mind. Second, sometimes the writing is dreadful. Hart can turn a phrase when he wants to, but those sequences of one-word sentences (and one-word paragraphs) meant to intensify and deepen really seem a little silly, though Stephen King seems to have transcended silly in the minds of many, despite his addiction to the flung single syllable. Here’s an example, unfair because it’s one of the worst, but I’m in my closing argument: “Disgust was an organ in Hunt’s gut.” Come again? No, never mind.

So why are the blood and the twisted nature of the story leading newspapers (yeah, I know) to say TLC “Rises to serious literature”? My guess is that the bar has been set so low by the series novels and splatterfest films that a book which suggests that the monsters are among us down in eastern N.C. (despite the lack of dialect markers and idiom, genuine regional lore or the resonance of a real culture) is a clean change of shirts. You’ve heard of made-for-TV movies; this is a made-for-TV book, except that it seems already from TV, though maybe that’s the point. 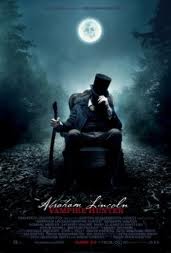 [Coda: In case anyone’s dying to know, I did eventually read Seth Grahame-Smith’s Abraham Lincoln Vampire Hunter and found it an even mix of entertainment and annoyance. Coincidence and obfuscation (especially pertaining to what powers vampires have and how a man with an axe can be quick enough and strong enough to defeat them in combat) interfere with any scrupulous attempt to willingly suspend disbelief. Twain’s hilarious “Fenimore Cooper’s Literary Offenses” provides a useful litmus for both the plotting and the style of the novel, and one wonders why the author chose to fabricate journals by Abraham Lincoln for this face-paced confection. Lincoln is one of the most distinctive prose stylists in American literature, but the style of these “extracts” is hysterical with exclamation marks, often flaccid and almost devoid of Lincoln’s signature rhetorical architecture. It’s all too much Dark Shadows and not enough Bram Stoker. As for the highly-touted research behind the book, most of the history can, in fact, be gleaned from Wikipedia, and Grahame-Smith manufactures fictoids like an affair between John Wilkes Booth and Mary Surratt to no evident purpose. A writer at Vanity Fair called ALVH “the funniest, most action-packed, and weirdly well-researched account of the Civil War you’ll probably read in a long time. . . ,” but the firing on Fort Sumter occurs with the book nearly 80% done. Did anyone who blurbed the book read the whole thing? I won’t say I regret spending an afternoon on it, and the cleverness is undeniable, while the book’s fundamental concept is wild and weird and might have made for a fine short story in the horror genre. It’s perhaps worth saying that Grahame-Smith also wrote the screenplay to the wild and delightful film version that not only omits most of the story but adds some delicious touches of its own, and the visual spectacle of stampede, vampire ball, and trestle conflagration made that matinee a fine one, indeed.]

15 Responses to The Last Child by John Hart (Minotaur Books)