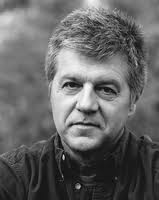 We’ve been in Bogliasco a week
before we understand the bird that’s wakened us
each miserably early morning is a nightingale.

I am pleased by this just as I was years ago,
when I had my picture taken in Rome,
kneeling next to the gravestone of John Keats.

Every time I look at that picture, I think, There I am, kneeling
next to the gravestone of John Keats.  And this week,
wakened every dark morning before four, I think,

I’m hearing the same kind of bird Keats wrote of, at Hampstead,
in one of the great odes of 1819, and it makes me a little sad
to confess that of them all I love the nightingale ode least.

Even the bird’s singing—fulsome and musical,
especially in the still-dark Ligurian morning—
does not appeal to me as it did to Keats.  At this deep blue

and aubadial hour, it’s too loud.  And too much.
But then, so is the fact that on Bartleby.com,
right there on my screen next to Keats’ poem,

is Alexia.  She’s beautiful and pouty, barely dressed,
“in a relationship,” it says in Italian, but who
“ha insoddisfatti desideri.”  She has “unsatisfied desires,”

in other words.  “Aiutala!,” it implores.  Help her!  Too much, yes,
but interesting:  Keats, a nightingale, unsatisfied desires,
the longing for perfection, and Alexia.  Here she is again,

this time alongside “To Autumn,” a poem I prefer,
although now I’m puzzled by both her abundance
and her ubiquity, since she’s next to the Grecian urn

and Melancholy too.  She’s not by the “Ode to Psyche,”
which is strange, since the first words of that one are
“O Goddess!,” and clearly that’s what Alexia’s meant to appear

to anyone who comes upon her here. (She’s 34, it says,
almost a decade older than Keats ever was.)
For some reason Bartleby prefers not to offer “Indolence” at all;

it’s nowhere on the site, though Keats himself described its subject
as “the only happiness . . . the body overpowering the Mind,”
something Alexia could be said to personify: a bold lover

one can never kiss.  As for the figures on the urn, it’s true,
they will live in supple youth and mad pursuit
as long as does the urn, and their desires will

in all that time go unsatisfied:  boughs that cannot shed
their leaves, the piper who unwearied pipes new songs forever,
the figures forever warm and still to be enjoyed, forever

panting, forever young.  Some believe Keats died a virgin.
Others think his most worldly friend, Brown,
surely took him to a brothel once.  Meanwhile, here in the dark

Italian morning, I left the woman I love in bed a floor below
in order to investigate a bird whose song I never heard
except in words.  I made my way to where, thousands of miles

from home and all my books, I could examine
how such a thing might matter to me.  And when I sought
Keats’ poems electronically, there was Alexia,

and since then I have thought more of her than of Keats,
or my beloved, or the nightingale still singing outside.
Even leaned dangerously far out the studio window,

I can’t see it.  And back on the computer screen, Alexia—
despite the almost two-centuries-old, deathless lines
to her right—insists that it is she who should have my attention,

even as the nightingale sings on.  Of love,
Keats said, “It is my religion.  I could die for it.”
He also said, “I would sooner fail than not be among

the greatest,” and then he died, believing himself a failure.
If I abandon this task soon and return to our room,
I’ll find my lover in bed, sleep-warm and soft.  But still,

there remains something I have not said and believed I could.
I thought it had to do with poetry, but it seems I was wrong.
Keats’ desire was to make something beautiful and true,

and also the satisfaction not only of knowing he’d done so,
but that the world would know it and acknowledge it too,
and that acknowledgment came too late to do him any good.

One more, and among the least, in the endless human plague
of unsatisfied desires.  And what I might have said, or might yet,
has nothing to do with the viewless wings of Poesy,

and more to do with the way the dull brain perplexes and retards
the body’s progress toward love.  Imagine writing the line,
“More happy love! more happy, happy love!”  What does it mean

that I can’t?   Her lack of satisfaction makes Alexia look miserable
in an ever-so-ravishable way, but if I clicked on “Aiutala,”
I would be no closer to her than I am to Keats.

Therefore, the villa’s twenty-four stone stairs
back down to the second floor fly by as swift as in a dream,
and back in my bed and my lover’s arms again,

it is my mind that reawakens and overpowers, for a while at least,
my body, and I speak:  nothing of Alexia, Keats, the nightingale, or the odes;
nothing of how tender the night has been, or the least sickness for home;

only remembrance, softly:  that she recall the night of the day
she took my picture as I knelt by the grave of a Young English Poet.
Weary from hours walking the ancient streets of Rome,

we lay on a roof-top terrace no more than a hundred yards
from the room he died in.  In the distance, St. Peter’s dome
glowed silver-blue.  Remember?  We were there all night,

and all night, gulls from the Tiber passed overhead, squawking.
No one would ever describe their calls as soulful or melodious,
but that night, I say, they were beautiful, and she is satisfied.