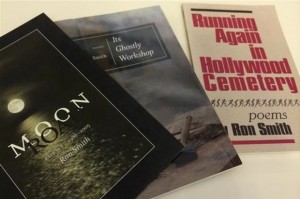 Question from Margaret Mackinnon on the Shenandoah site:
A lot of poems I read from contemporary American writers focus on the personal lyric moment (producing what I think of as the small neighborhood poem). Many of your poems draw on history and seem to involve research. Could you say something about the poem as research project, as opposed to the poem as confessional moment? Do you think we’ve perhaps exhausted the confessional poem? Or does the poem based in art, history, or research actually become a more effective vehicle for the personal story?

Ron Smith (answered in May, 2015):
First, I’d like to preserve the more etymologically obvious meaning of “confessional.” To me, the confessional poem is an admission of sin–which I take to be a humiliating transgression against either divine law or, more likely, against family and friends. The confessional poem forces the reader into the role of confessor. In this category I place some of the more embarrassing poems of Robert Lowell, Anne Sexton, and Sharon Olds. Such poems are not merely personal, they are excruciatingly so. They present themselves as revelations of misconduct in which the properly private becomes shamefully public.

QUESTION FROM EVAN DAVIS ON THE SHENANDOAH SITE, 24 NOV 2014:

Some poets (you, I think?) like to say that poetry is open to everyone, but many readers take one look at the line breaks and run for a novel. So I’m curious how, when you’re writing, you think about the accessibility of poetry. Should a poem provide all the tools for its own reading? (And what would that mean anyway?) How much do you expect the reader to bring to the table? Your first book of poetry for the most part didn’t demand extensive literary and cultural knowledge. We might not have seen the photograph of your mother and father, but the poem “Photograph of My Father and My Mother, 1946” tells us all we need to know about it. But a more recent poem like “Ford, Joyce, Pound, Quinn,” doesn’t work that way, and the poem you dedicated to Mason Bates begins with a title in Greek, a biographical allusion to Keats’s physician in line one, and a literary allusion to “Ode on a Nightingale” in line two. The name “Keats” doesn’t even appear. How has your thinking changed about the demands you make on your readers?

I don’t believe my thinking has really changed on this subject, though I suppose my practice has, a bit. I never thought obviousness or simplicity or ease were necessarily virtues in literature. Since about the age of twenty I have loved The Waste Land and big chunks of Pound’s Cantos and those great prose poems of Joyce and Faulkner and Pynchon.

In those early poems it wasn’t accessibility I was aiming for. In fact, there came a time when a reader’s praise for my “accessibility” began to worry me. I began to feel that there was more I could do, altitudes I hadn’t reached, chances I had failed to take. Of course, it’s really not true that “Photograph of My Father and My Mother, 1946” tells readers all they need to know. The simplest poem makes extra-textual demands on the reader.

Richard Poirier, in a book on Emerson, if I remember correctly, made the distinction between literary complexity and literary density, the former a neutral term, but the latter a term of praise. Density of meaning. I’m with Poirier here. Whether the poem is easy or difficult of access, once I’m inside I want density. It’s a pleasure both to pick Charles Wright’s locks and to find yourself inside that poet’s restless ambivalence. On the other hand, there are, say, Ted Kooser and Claudia Emerson, poets who usher you with ease and grace into the fullness of so-called ordinary experience. I think of them in the tradition of Frost, that emblem of the accessible who is nevertheless extremely subtle and packed with meaning—dense, in Poirier’s terminology.

In one sense, all poetry is easy. It’s like turning on your iPod or casting a glance at a painting on a gallery wall. You let the music wash over you. You just look at the colors, the shapes. What’s hard about that?

In another sense, all good poetry is difficult, mysterious—because the world is difficult and mysterious. I don’t fully understand a single tree in my back yard. What makes me think I should fully understand a poem about a sassafras? And psychology offers lots of mysteries. How can I know what the lawyer John Quinn is feeling as he poses for a photo with Ford and Joyce and Pound, those of the giants of literary modernism? What does his facial expression reveal? I write to figure it out, to discover possibilities, at least.

When I was six or so, a neighbor, a weekend painter named Jack Drawdy, showed me in my coloring book that green trees in the distance were in fact bluish gray. He also showed me that in reality—unlike on The Wide World of Disney—colors were always mixed. Easy poems tend to lie about the world.

Still, poetry is not philosophy (or psychology). Most of the time, it’s not the ideas in a poem that cause the reader trouble. Most of the time it’s something simple like vocabulary or allusion. Readers who don’t know who Edward Teller was or what happened at Pork Chop Hill or what idrante means in Italian can easily find out. Most of us use Google all the time now. For my 2013 book Its Ghostly Workshop I never even suggested a page of notes. And my editors never mentioned the lack. Before internet searches became so pervasive they would have.

Problems with syntax often require some patience. Sometimes questions like “Which noun is the subject of the sentence?” and “Is that word an adjective or a verb?” are not easy to answer. We have to get down to some conscious work, I admit. And then there are lines like Wallace Stevens’s “Let be be finale of seem”—which is, I think, only momentarily perplexing. Let X be finale of Y, is the form of the sentence. We see that Stevens has employed verbs as nouns for some reason. But since we know the difference between being and seeming, between reality and mere appearance, the line pretty quickly yields its sense.

Of course, sometimes the problems with a poem can be a lot trickier. Tone is an especially troublesome issue. When the speaker in a Dickinson poem begins by saying, “This World is not Conclusion,” do you know whether or not she (he?) is just whistling in the dark? Is that the line of a believer in Afterlife who aims to hoist you to her level of certainty—or is it the cry of a speaker fighting desperately to retain belief?

Another problem can be source of image. When you encounter an image in a work, can you be sure that it’s “real”? That is, is the speaker in the poem really seeing or hearing what he causes us to see or hear? Or is he merely imagining it? In line five of Frost’s “The Onset” the snow is, right now, “hissing on the yet uncovered ground”; but what about the action of the melting snow going “downhill / In water of a slender April rill / That flashes tail through last year’s withered brake / And dead weeds, like a disappearing snake”? Clearly, the snake is not “real” (even though we may see it vividly in our minds)—but neither is the “slender April rill/That flashes” so vividly. That rill is not “real,” not immediately present in the same way that the sound of the snow is. The speaker is imagining seeing it.

And of course ambiguous or shifting speakers in a poem can be especially baffling. My touchstone is Eliot’s The Waste Land, where part of the fun is trying to keep up with just who is speaking (or thinking) each line. I refer you also to Louise Glück, whose speakers are, I suspect, legion.

Are some poets unnecessarily difficult? Sure. What I object to most in opaque poems is the merely private. Too many poets forget that they need to write for at least one reader. Too often that farm equipment in stanza two means something to the speaker (and the poet) that I will never be able to discover without insider information. Why should I care? And yet, maybe the cultural moment can provide some context for what looks like a private symbol. Maybe in 1923 a lot really did depend upon William Carlos Williams’s red wheelbarrow . . . .

Forgive the longwinded and somewhat digressive answer to your question. This is a subject I find particularly interesting and important.