You principle of song, what are you for now
Perking up under any spasmodic light
To trot out your shadowed warblings?

Mince, slight pillar. And sleek down
Your furriness. Slim as a whippy wire
Shall be your hope, and ultraflexible.

But little song, don’t so instruct yourself
For none are hanging around to hear you.
They have gone bustling or stumbling well away.

“The only constant is a commitment to the thing that is song,” Denise Riley said in an interview with Shearsman Books on the topic of her poetry. Throughout her lengthy career, Riley has adopted the guises of feminist critic, philosopher, and poet, but has kept a consistent and undeniable music to her writing. However, in this selection from her most recent book Say Something Back, she challenges this fundamental aspect of her poetry and poetry in general.

This selection is part of a longer “song cycle” called “A Part Song,” a long work that cycles through a variety of different expressions of song, elegy, and voice in order to process the death of Riley’s son. This section, which begins the poem, acts a sort of thesis statement, posing the major question which Riley addresses through the rest of “A Part Song:” “you principle of song, what are you for now?”

Within the context of Riley’s poetry, this question represents a huge break with her tradition as a lyric poet. In this first stanza, Riley emphasizes “song” as capricious and ineffective. “Spasmodic” shows the fleeting and ephemeral nature of song, while reducing lyricism to “warblings” emphasizes the feeble and wavering nature of song. Riley expresses a need for structure and stability in this trauma that she characterizes poetry as not possessing. This continues in the next stanza, as song becomes a “slight pillar,” with the mocking word “mince” ascribing weak and potentially effeminate connotations. The words of the poem itself break from lyricism as Riley ends the stanza on the ungainly word “ultraflexible,” a latinate construct that sticks out like a wrong note at the end of a musical phrase.

This section concludes by dismissing song entirely. Riley addresses the concept of song in second person, insulting it by saying “none are hanging around to hear you.” Riley silences the voice of music, the same lyricism that had been a fundamental aspect of her poetry for her entire career. Riley emphasizes the disconnection from music by saying that everyone has “gone bustling or stumbling well away.” From the perspective of someone who sings with a choir, both “bustling” and “stumbling” sound distinctly anti-musical. The run of consonants in the middle of both words (“stl” and “mbl” respectively) force the reader to chew through the words in a way that prevents them from being “singable” or easy to read musically. 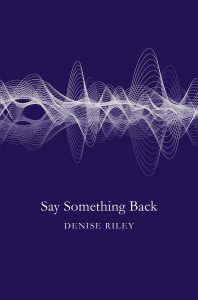 The selection I’ve chosen as this poem of the week is filled with jarring words, mocking metaphors, and phrases that can sometimes be difficult to work through. It’s angular style and strange diction are, admittedly, a poor indication of the rest of Riley’s work, or even the rest of “A Part Song.” But the central question it raises is a necessary one, and one that haunts the work of not just Denise Riley, but every poet: In a world filled with sorrows, like the death of Riley’s son, what purpose does the lyric and beautiful have? The inability of traditional “song” poetry to reflect a new world motivated the modernist and postmodernist movements in the 20th century and continues to influence the avant-garde poetry of the Cambridge school as well as the adoption of colloquial internet slang in new contemporary poets.

I would hate to spoil “A Part Song” for you, so again I strongly recommend reading the rest of it before reading this. Riley does reach a conclusion. After cycling through different verse forms and voices in an attempt to reconcile with the death of her son, Riley ultimately concludes with a simple eight-line section of rhyming, metered poetry in which she adopts the voice of her late son calling out to his mother. The last quatrain reads “O let me be, my mother / in no unquiet grave / my bone dust is faint coral / under the fretful wave.” The use of antiquated words and phrases (“o,” “unquiet grave”) as well as the meter and rhyme call an immediate association with English lyric and romantic poetry, marking a reversal from the techniques used at the beginning of the poem. Riley ends the poem by letting her son’s body become a part of the natural world, as her words to fold into the flow of the “fretful wave,” the rhythms moving like the ebb and flow of the water. Riley finds peace in the lyric. She finds solace in the natural rhythms that feel like the waves. And ultimately, she answers the question she began the poem with. “You principle of song, what are you for now?” she asked. It is for expressing pain and accepting it.

[ For more by Denise Riley, her book Say Something Back can be found for purchase here: https://www.amazon.com/Say-Something-Back-Denise-Riley/dp/1447270371 ]