I discovered Olson on an oppressively dreary day in southeast Scotland, locked inside a library cubicle with an impenetrable book of obscure English avant-garde poetry. I had an assignment to read J.H. Prynne, the widely-admired but seldom-read (for good reason) leader of the English experimental cutting edge, a poet deeply tied to Cambridge University and its cadre of anti-lyric radicalists.

I was introduced to Prynne through my professor at the time, Don Paterson, OBE, an excellent poet in his own right whose gorgeous and deeply Scottish verse won him a pair of T.S. Eliot prizes and a consistent publication in British dailies. Despite telling us that he was not a fan of Prynne, and, instead, wrote poetry specifically in opposition to his sensibilities, Prof. Paterson had us read a long, manic, tangential, and brilliant lecture that Prynne gave on a somewhat obscure American postmodernist named Charles Olson.

Prynne’s topic–and my selection for this week–comes from Olson’s Maximus Poems, an epic exploration of American history, the local world of Massachusetts, and the wandering Greek philosopher Maximus of Tyre. Not unlike Pound’s Cantos, Maximus Poems was an attempt to create a uniquely American mythic literature. And, like Cantos, Olson’s work was crucial to the development of a poetic style that was completely divorced from the sensibilities of the most important and influential British poets.

British poets of the 1950s–the era when Olson rose to a place of prominence and influence–expanded upon the lyrical modernist tradition developed by T.S. Eliot and continued by poets like W.H. Auden and Dylan Thomas. Theirs was a poetry that combined modernist sensibilities with the English lyric tradition. Meanwhile, on the other coast, a different style was developing. Influenced by the objectivism of William Carlos Williams, which focused on accurately representing objects as they appeared in the world, and the linguistic experiments of late Ezra Pound. 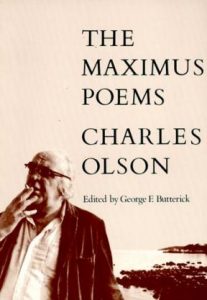 “Maximus, to himself,” offers itself in direct opposition to the mythic tradition of the British lyric, which found itself in conversation with texts from across history. “I have made dialogues,” Olson says, as Maximus. “I have discussed ancient texts,/have thrown what light I could, offered / what pleasure / doceat allows,” he says, specifically mentioning the classics and using a Latin word. However, despite mentioning these things, Olson’s Maximus says that “the known,” the concrete parts of life, “I have had to be given, / a life, love, and from one man / the world.” Whether the “one man” is interpreted as a higher power, a father, or even the speaker himself, Maximus, and, by extension, Olson, are saying that engagement with the stories of the past does not deliver the crucial parts of life, which must instead be given to a person by the world.

Finally, in a way typical of the objectivist school, Olson ends this poem with a concrete image that encapsulates the central feelings of the poem. Describing the “sea stretching out from my feet,” Olson evokes the feeling of locating oneself in an overwhelming world, while still emphasizing that experience is entirely based on one’s personal perspective, hence the sea emanating from Maximus.

It is this image of the “sea stretching out from my feet” that I connected to, walking along my favorite cold, wind-swept beach in Fife, thousands of miles away from the place I call home. In his lecture on the Maximus poems, Prynne offered a commentary on why he gravitates toward the uniquely American, often anti-lyric styles of Olson’s postmodernists: “But to be at home in that larger sense is not permitted to the lyric. It is permitted only to the great epic performances: and what’s more, to the great epic performances that can carry across that distance, and which you can carry with: that’s to say, the obscure epic.” An evocation of a true concrete home, the sense of feeling anchored on the planet, is exclusively the domain of a great epic like The Maximus Poems. By utilizing concrete images, Olson is able to create a feeling of home that Prynne finds not in the lyrics modernism of the British poets.

It took a journey across the ocean, the teachings of a Scottish lyric poet, and the lecture of a mad avant-garde language poet to reach Charles Olson, but doing so brought me to the closest evocation of a home that I could find in poetry. Even thousands of miles away, sitting on a beach in Scotland, I felt a connection as the sea stretched out from my feet.

“Maximus, to himself.” The Maximus Poems. Berkeley: University of California Press., 1983. Web.