O poorest country, this is not your name.
You should be called beacon. You should

be called flame. Almond and bougainvillea,
garden and green mountain, villa and hut,

girl with red ribbons in her hair,
books under arm, charmed by the light

of morning, charcoal seller in black skirt,
encircled by dead trees. You, country,

are merchant woman and eager clerk,
grandfather at the gate, at the crossroads

with the flashlight, with all in sight.

“The poorest country in the Western Hemisphere” hasn’t really come up in the news lately. Thankfully, the latest wave of hurricanes has missed it, for the most part. It is slowly rebuilding itself from the devastation of last year’s Hurricane Matthew—not to mention the massive earthquake that hit almost 8 years ago. It also elected Jovenel Moïse as its new president back in February, and has passed some pretty important anti-trafficking laws among recent legislation, but not many Americans are even aware of the fact that it has a government. They only know of it by that seven-word line, the one that American media can’t seem to resist.

When I tell people that I’m a first-generation Haitian-American, some actually apologize. Others just shake their heads, eyes full of pity, as they parrot the same tired facts—things they may have heard on the news, may have seen once in a Red Cross fundraising report, may have read in the brochure for a church mission trip that they didn’t join—back to me. The familiar spiel usually ends with, “It’s such a shame, what’s happening over there…” I don’t know what that they mean by that, and I doubt they know either. “What’s happening” is that this is a country with issues that, when put back in context, aren’t too different from those we face in the United States. That is why this poem by Danielle Legros Georges is so important. 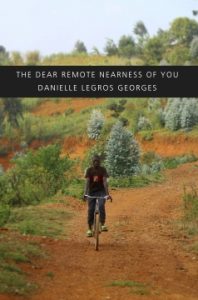 I recognize the frustration that comes through the title of this poem; it is one of the elements that drew me in the first time I read it. It would be perfectly acceptable to sustain—throughout the whole piece—the defiance that is so evident in both the title and first line, but Legros Georges doesn’t do that. The poem’s first, second, and third lines are the quiet declaration of hope and a different kind of pride, one that resonates with all Haitians in the United States who have ever had their country explained to them. “You should be called beacon. You should / be called flame.”

Legros Georges goes on to carry the reader through the poem as though she has been patiently waiting for the chance to finally speak the truth, to gently set straight the limited record that American media has created. Her statements are propelled by commas and enjambments until the eighth line. From there, she regroups and continues in the same style until the end of the poem. What’s more is that Legros Georges is not speaking to the reader, but to Haiti. It is as though she does not need to explain the beauty of her country to others, but to re-explain it to herself. In just a few words, she encapsulates the true, complex, rich essence of her country, from “garden and green mountain” to the “girl with the red ribbon in her hair.”

As for her own background, Danielle Legros Georges was born in Haiti and raised in the United States. She is a graduate of Emerson College and New York University, where she respectively received her bachelor’s and master’s degrees. In 2014, she was chosen as the second poet laureate of Boston, where she is currently a professor at Lesley University.

“Poem for the Poorest County in the Western Hemisphere.” Poets.org. 2010. Web. https://www.poets.org/poetsorg/poem/poem-poorest-country-western-hemisphere

[This poem appears in Danielle Legros Georges’ 2016 poetry collection, The Dear Remote Nearness of You (Barrow Street Press 2016), which is available here: https://www.amazon.com/Dear-Remote-Nearness-You/dp/0989329690]