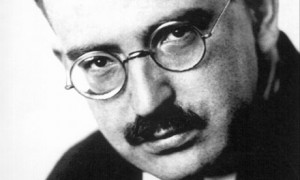 This term I am privileged enough to be a part of Professor Warren’s Literary Theory class. One of the theorists we have touched upon is Walter Benjamin (1892-1940), whose theories about Marxist tradition possess a timelessness that is very attractive to modern day social media aficionados such as myself. Benjamin explores the ways in which our world has become an audio-visual world in his essay “The Work of Art in the Age of Mechanical Reproduction”. This essay is visionary in that Benjamin focuses on the history of the future as it relates to his present time in 1936. The fragmented style of the essay is much like a piece of artwork itself. Benjamin plays on the montage style in order to allow room for all of the many intruding forms of artistic reproduction that are beginning, in 1936, to rely on mechanical function. Benjamin focuses on the relationship of various forms of artistic reproduction, such as film, to its audience and determines that sacrificing the tangible qualities of the original object for the abstract and separated nature of film, theater, or paintings provides a degradation of its original authenticity. The audience, or the masses, concentrates on the diluted presence of mechanically reproduced art as a means of disconnecting, of reaching a state of passivity that lends itself to non-thinking.

Benjamin’s theory raises questions about digital technology and the plethora of handheld devices practically begging me to consume myself with on a regular basis between, and even sometimes during, class. Benjamin’s essay is prophetic in that it is the history of now, whenever that may be for the individual reader.  In reaching out to people through my Iphone I am merely touching a screen in hopes of establishing some sort of connection with flesh and reality half a mile away from me, but far enough for me to choose layers of abstract separation as an excuse for diluting authentic connection.  Movies provide that same level of distraction discussed by Benjamin in that they offer an escape from concentration. Rather than be absorbed by the action, we, the masses, passively absorb it- make no effort to become a part of it, but rather lend ourselves to distraction.

Benjamin’s essay, while it will not keep me from my Iphone and favorite movies, will certainly be on my mind the next time I reach for my phone to text, call, skype, snap chat, heytell, whatsapp, Facebook, or tweet at a loved one.

I walk through the long schoolroom questioning;
A kind old nun in a white hood replies;
The children learn to cipher and to sing,
To study reading-books and histories,
To cut and sew, be neat in everything
In the best modern way — the children’s eyes
In momentary wonder stare upon
A sixty-year-old smiling public man.

I dream of a Ledaean body, bent
Above a sinking fire, a tale that she
Told of a harsh reproof, or trivial event
That changed some childish day to tragedy —
Told, and it seemed that our two natures blent
Into a sphere from youthful sympathy,
Or else, to alter Plato’s parable,
Into the yolk and white of the one shell.

And thinking of that fit of grief or rage
I look upon one child or t’other there
And wonder if she stood so at that age —
For even daughters of the swan can share
Something of every paddler’s heritage —
And had that colour upon cheek or hair,
And thereupon my heart is driven wild:
She stands before me as a living child.

Her present image floats into the mind —
Did Quattrocento finger fashion it
Hollow of cheek as though it drank the wind
And took a mess of shadows for its meat?
And I though never of Ledaean kind
Had pretty plumage once — enough of that,
Better to smile on all that smile, and show
There is a comfortable kind of old scarecrow.

What youthful mother, a shape upon her lap
Honey of generation had betrayed,
And that must sleep, shriek, struggle to escape
As recollection or the drug decide,
Would think her Son, did she but see that shape
With sixty or more winters on its head,
A compensation for the pang of his birth,
Or the uncertainty of his setting forth?

Plato thought nature but a spume that plays
Upon a ghostly paradigm of things;
Solider Aristotle played the taws
Upon the bottom of a king of kings;
World-famous golden-thighed Pythagoras
Fingered upon a fiddle-stick or strings
What a star sang and careless Muses heard:
Old clothes upon old sticks to scare a bird.

Both nuns and mothers worship images,
But those the candles light are not as those
That animate a mother’s reveries,
But keep a marble or a bronze repose.
And yet they too break hearts — O presences
That passion, piety or affection knows,
And that all heavenly glory symbolise —
O self-born mockers of man’s enterprise;

Labour is blossoming or dancing where
The body is not bruised to pleasure soul.
Nor beauty born out of its own despair,
Nor blear-eyed wisdom out of midnight oil.
O chestnut-tree, great-rooted blossomer,
Are you the leaf, the blossom or the bole?
O body swayed to music, O brightening glance,
How can we know the dancer from the dance?

In “Among School Children,” Yeats works through feelings of desire associated with Maud Gonne.  The poem takes place in a schoolroom where Yeats establishes a dichotomy between the youthfulness of schoolchildren and his own aged, dreamy mindset.  From the children’s viewpoint, Yeats is “a sixty year old smiling public man,” and their youth sets off his reverie (8).  In a trance he sees “a Ledaean body…/that changed some childish day to tragedy” (11).  The difference between looking and seeing separates the two worlds Yeats walks between; in the hall of school children he looks at them, but sees her.  Yeats writes, “I look upon one child or t’other there/And wonder if she stood so at that age” (19).  He continues, “And thereupon my heart is driven wild:/She stands before me as a living child” (24).

Injecting humor in this image of an old man staring at young children, Yeats explains he “Had pretty plumage once-enough of that,/Better to smile on all that smile” (30).  He distinguishes between the two worlds but chooses to stay in his reverie and to dig deeper into life’s intricacies.  Pain and struggle are feelings universal to all humans, regardless of age: “for even daughters of the swan can share/Something of every paddler’s heritage” (20).  Yeats relishes the visions that bring him back to Maud Gonne. He revels in the moments when his mind can freely partake in the joys of “blossoming or dancing” in a pool of thoughts where beauty is not “born out of its own despair” (57-9).  It is these small moments that make the struggles worthwhile

William Butler Yeats (1865-1939), of Anglo-Irish Protestant Ascendancy, was arguably the greatest poet of the twentieth century.  Through poetry, Yeats analyzed a world he viewed as inadequate.  Maud Gonne, a beacon of femininity for Yeats, provided him with the escape he sought.  His frustration over his unrequited love for her emerges as a prominent theme in many of his poems, even one as innocently endearing as “Among School Children.”

“Among School Children” is part of his collection of poems, The Tower, published in 1928. The collection is available for purchase on Amazon.