Listen, children:
Your father is dead.
From his old coats
I’ll make you little jackets;
I’ll make you little trousers
From his old pants.
There’ll be in his pockets
Things he used to put there,
Keys and pennies
Covered with tobacco;
Dan shall have the pennies
To save in his bank;
Anne shall have the keys
To make a pretty noise with.
Life must go on,
And the dead must be forgotten;
Life must go on,
Though good men die;
Anne, eat your breakfast;
Dan, take your medicine;
Life must go on;
I forget just why.

Poem selected and commented on by Caroline Drennen

Opening with a surprising statement, “Listen, children: Your father is dead,” Millay immediately informs readers of the context of her poem: a widow (the presumed speaker but perhaps not the author) trying to help her children mourn a great loss at a difficult time. She dives into the widow’s mindset. Using enjambment in lines three through fourteen, Millay increases the pace and portrays the widow as feeling overwhelmed.

In the final lines, the speaker repeatedly advises her children that, “Life must go on.” The repetition, however, undermines the motherly advice because it indicates that the speaker may still be trying to convince herself of such. This is further highlighted by the final line: “I forget just why.” After three attempts to persuade herself, the speaker admits that she forgets why life moves on. 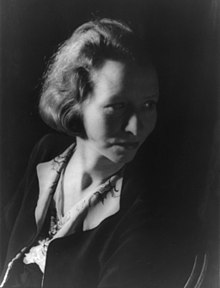 Throughout the poem, Millay focuses on the quotidian: turning old coats and pants into little jackets and trousers, finding “keys and pennies covered with tobacco,” saving coins, and jingling keys. This is a refreshing departure from the various tropes of mourning. She maintains the focus on the mundane throughout the whole poem, which on the surface seems to contradict her advice that life goes. This, however, is not a contradiction but rather a second piece of advice. In repurposing her husband’s old clothes, the mother is acting out a metaphor of life continuing on while simultaneously reminding her children to always keep their late father close.

An American playwright and poet, Edna St. Vincent Millay was the third woman to win the Pulitzer Prize for poetry in 1923. She was born in Maine but after graduating from Vassar College in 1913, she moved to New York City. Millay is best known for her sonnets and feminist activism. “Lament” can be found in her Collected Poems, which was edited by her sister Norma Millay in 1956 and published by Harper Perennial in 2011.