He was a big man, says the size of his shoes
on a pile of broken dishes by the house;
a tall man too, says the length of the bed
in an upstairs room; and a good, God-fearing man,
says the Bible with a broken back
on the floor below the window, dusty with sun;
but not a man for farming, say the fields
cluttered with boulders and the leaky barn.

A woman lived with him, says the bedroom wall
papered with lilacs and the kitchen shelves
covered with oilcloth, and they had a child,
says the sandbox made from a tractor tire.
Money was scarce, say the jars of plum preserves
and canned tomatoes sealed in the cellar hole.
And the winters cold, say the rags in the window frames.
It was lonely here, says the narrow country road.

Something went wrong, says the empty house
in the weed-choked yard. Stones in the fields
say he was not a farmer; the still-sealed jars
in the cellar say she left in a nervous haste.
And the child? Its toys are strewn in the yard
like branches after a storm—a rubber cow,
a rusty tractor with a broken plow,
a doll in overalls. Something went wrong, they say.

Poem selected and commented on by Lindsey Hewitt

Poetry is written to invoke emotion—regardless of whether those feelings are negative or positive. Sometimes, the emotion readers draw from a poem are not those intended by the author.” Abandoned Farm House” by Ted Kooser plays with the ambiguity of emotion through the background of abandonment. Kooser utilizes repetitive personification, as well as the diction of desertion, creating an eerie and mysterious mood throughout his poem. 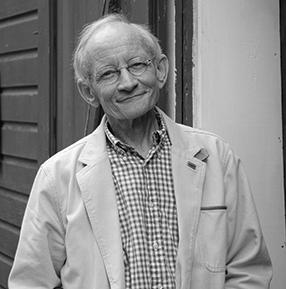 Rather than using people to narrate his poem, Kooser allows the derelict objects left in the farmhouse to tell their story and the story of their long-gone owners. The shoes, the bed, the “Bible with a broken back” tell their stories as pieces of information left behind in seemingly hasty eviction; the personification of these objects paints this picture. Despite their poverty, the family left “jars of plum preserves/ and canned tomatoes sealed in the cellar hole.” Finally, someone says it, “Something went wrong, says the empty house/ in the weed-choked yard.”

Kooser also uses eerie diction to cast readers into this obscure scene. Using words like “broken dishes” and “broken back” of a Bible abandoned by a “God-fearing man” begin to hint at something awry. Kooser continues to use darker diction such as “cold,” “lonely,” and “weed-choked.”

Kooser, however, did not intend for such mystery to permeate his poem. He “thought [it] would be obvious…that the man, the head of the household, had failed at farming and with his family abandoned the farm” (Kooser 12).

The combination of this uncanny diction, along with the darkening accounts of the abandoned objects creates a mood of ambiguous mystery, leaving readers with more questions than answers as the objects rise in unison, “Something went wrong, they say.” Kooser, however, intended readers to quickly solve this mystery, proving the split between intended and found meaning within poetry.