How soon hath Time, the subtle thief of youth,
Stolen on his wing my three and twentieth year!
My hasting days fly on with full career,
But my late spring no bud or blossom shew’th.
Perhaps my semblance might deceived the truth,
That I to manhood am arrived so near,
And inward ripeness doth much less appear,
That some more timely-happy spirits endu’th.
Yet be it less or more, or soon or slow,
It shall be still in strictest measure ev’n
To that same lot, however mean or high,
Toward which Time leads me, and the will of Heav’n;
All is, if I have grace to use it so,
As ever in my great Task-Master’s eye.

Poem selected and commented on by Melinda Kauffman

Milton is most commonly associated with his great epic poem, “Paradise Lost”. However, Milton had quite the tireless career. Even before Milton set to work on his great epic, he studied at the competitive Cambridge, where he often felt inadequate in comparison to his peers. His Sonnet VII is an example of how he felt in his younger years, desiring to be known as a great writer, but struggling to break into the literary world.

He begins his sonnet with Time personified as the thief, which robs him of his youth (1) and his “hasting days fly on with full career” (3). He is concerned about his accomplishments and feels like he has nothing to show because his “late spring no bud or blossom shew’th” (4). However, the poem turns at line 9 and he acknowledges that it’s in his best interest to accept God’s will and to learn to give Him, the “great Task-Master” (14) the control.

This same desire to be known for one’s accomplishments is evident in my own life and I am sure the lives of many young adults. I chose this poem by Milton, because I too feel inadequate in my accomplishments at the age of twenty. I am unsure of what I would like to do for the rest of my life let alone after college. However, when I look at the life of Milton and see how long it took for him to become an established writer, I remind myself that I do indeed have time. It often feels like Time is racing against us and literally robbing us of our youth like Milton said, but the truth is Time is providential and will guide us to do the work that we should. 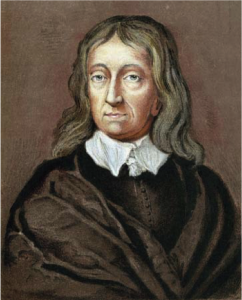 John Milton is considered on of the most influential English writers in history. Mostly known for his epic Paradise Lost (Penguin Books, 2000), Milton has also written a plethora of poetry and other prose. (Oxford University Press, 1991). His sonnets made their way into the literary realm early on in his career, as well as his prose mostly written during his time as Secretary for Foreign Treasures. Although a controversial writer at times, Milton paved the way for many poets that came after him and is mostly renowned for his blank verse epic poem, Paradise Lost.