There is a singer everyone has heard,
Loud, a mid-summer and a mid-wood bird,
Who makes the solid tree trunks sound again.
He says that leaves are old and that for flowers
Mid-summer is to spring as one to ten.
He says the early petal-fall is past
When pear and cherry bloom went down in showers
On sunny days a moment overcast;
And comes that other fall we name the fall.
He says the highway dust is over all.
The bird would cease and be as other birds
But that he knows in singing not to sing.
The question that he frames in all but words
Is what to make of a diminished thing. 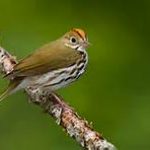 In a sonnet more intriguing and knotty than its opening would suggest, Frost asks a timely and disquieting question.  Perhaps the only answer is “in singing not to sing.”

This poem was first collected in Mountain Interval (1916) and can now be found in many selections of Frost’s verse.  My favorite reservoir of his poems is The Poetry of Robert Frost:The Collected Poems, Complete and Unabridged edited by Edward Connery Lathem and published by Owl Books of Henry Holt and Company, which is available at Amazon and other book stores.  It’s about the size of a Bible with easily readable print, but that’s probably just a coincidence. RTS