The dead woman who died from her blue dress is singing.
She sings drunk on death to the sun of her intoxication.
Within her song there is a blue dress,
there is a white horse, there is a green heart
tattooed with the echoes of her dead heartbeats.
Exposed to all of the ruins,
she sings with a lost girl
that is the woman: her amulet of good luck.
And despite the green mist on her lips
and the cold grey in her eyes,
her voice corrodes the distance that opens
between thirst and the hand that looks for the glass.
She sings. 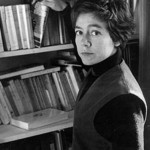 Alejandra Pizarnik is considered one of Argentina’s premiere poets from the mid-century. Born in 1936 in Buenos Aires, she attended university but never received her degree, instead choosing to study painting and poetry. Pizarnik was a prolific writer, publishing eight books of poetry and various essays by the time of her suicide at age 36. Her most famous books include Los trabajos y las noches, Extracción de la piedra de locura, and El infierno musical, in which the themes of loneliness, childhood, pain, and death dominate her work.

With simple language and movements, Alejandra Pizarnik creates a bizarre moment in the first line by introducing the “Night Singer” as a dead woman. The absurdity that follows throughout the rest of the poem comes from this detail about her death: she “died from her blue dress” (line 1). This odd occurrence primes the following images to be accentuated with one color, spanning blue, white, green, and grey. She “sings drunk on death” (line 2) about a white horse and a green heart tattoo, continuing Pizarnik’s theme of death throughout her poetry. The song is as bizarre as the poem itself, especially with the mention of the “lost girl / that is the woman” singing along. This “amulet of good luck” brings focus to the woman’s childhood and innocence. The imagery of her corpse concentrates on her face with the “green mist on her lips” and “the cold grey in her eyes,” describing intimate features with an observational, analytical tone, although the green mist adds to the fantastical whim and strangeness. The “Night Singer” ends with what seems to be a positive purpose, bringing “the glass,” the wanted object, closer to “the hand,” the seeker. Pizarnik ends the poem with a simple declaration, summarizing the poem and the dead woman’s action in two words: “She sings.”