You do not have to be good. 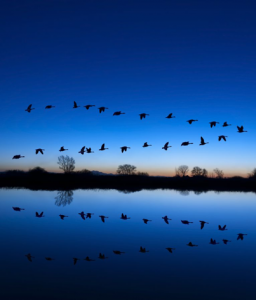 You do not have to walk on your knees

For a hundred miles through the desert, repenting.

You only have to let the soft animal of your body

love what it loves.

Tell me about despair, yours, and I will tell you mine.

Meanwhile the world goes on.

Meanwhile the sun and the clear pebbles of the rain

are moving across the landscapes,

over the prairies and the deep trees,

the mountain and the rivers.

Meanwhile the wild geese, high in the clean blue air,

Whoever you are, no matter how lonely,

the world offers itself to your imagination,

calls to you like the wild geese, harsh and exciting—

over and over announcing your place

in the family of things.

Originally published in Dream Work in 1986. Republished with author permission.

A simple declaration negating the motivation behind most actions opens “Wild Geese,” paving the way for heartfelt encouragement that addresses the reader specifically. Before reaching this point, however, Oliver also rejects the idea of repentance, putting the powerful grasp of regret behind her. She reveals her own truism: “You only have to let the soft animal of your body / love what it loves.” She continues with a request that would bewilder most of us used to responding to an inquiry about our state of being with “I’m good,” disregarding any second thought. Her offer of revealing her despair in return reveals the acceptance and understanding that prevails in these verses. The movement to the natural world expands the point of view with the repetition of “Meanwhile.” Meanwhile, when we are lonely, in despair, and full of regret, the world is expansive and welcoming. The invitation, in this case, is extended by the wild geese for whom the poem is named, with their “harsh and exciting” calls, inviting you home. 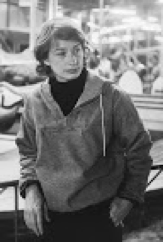 A prize-winning and prolific poet, Mary Oliver was born in a small town in Ohio. She attended Ohio State University and Vassar College before her career of writing poetry. Oliver has received copious awards throughout her life, including the Pulitzer Prize for Poetry in 1984 for her book American Primitive, the National Book Award for New and Selected Poems, and the New England Booksellers Association Award for Literary Excellence. Mary Oliver was described as “far and away, this country’s best-selling poet” by the New York Times.