If the angle of an eye is all,
the slant of hope, the slant of dreaming, according to each life,
what is the light of this city,
light of Lady Liberty, possessor of the most famous armpit in the world,
light of the lovers on Chinese soap operas, throwing BBQ’d ducks at each other
with that live-it-up-while-you’re-young, Woo Me kind of love,
light of the old men sitting on crates outside geegaw shops
selling dried seahorses & plastic Temples of Heaven,
light of the Ying ‘n’ Yang Junk Palace,
light of the Golden Phoenix Hair Salon, light of Wig-o-ramas,
light of the suntanners in Central Park turning over like rotisserie chickens
sizzling on a spit,
light of the Pluck U & Gone with the Wings fried-chicken shops,
the parking-meter-leaners, the Glamazons,
the oglers wearing fern-wilting quantities of cologne,
strutting, trash-talking, glorious:
the immigrants, the refugees, the peddlars, stockbrokers and janitors,
stenographers & cooks,
all of us making and unmaking ourselves,
hurrying forwards, toward who we’ll become, one way only, one life only:
free in time but not from it,
here in the city the living make together, and make and unmake over and over
Quick, quick, ask heaven of it, of every mortal relation,
feeling that is fleeing,
for what would the heart be without a heaven to set it on?
I can’t help thinking no word will ever be as full of life as this world,
I can’t help thinking of thanks.

Suji Kwock Kim is a Korean-American poet and playwright. She was educated at Yale College; the Iowa Writers’ Workshop; Seoul National University, where she was a Fulbright Scholar; and Stanford University, where she was a Stegner Fellow. Her first book, Notes from the Divided Country (2003), won numerous prizes, including the Addison Metcalf Award from the American Academy of Arts and Letters, the Walt Whitman Award from the Academy of American Poets, and a Mrs. Giles Whiting Award. Her work has been published in The New York Times, The Washington Post, The Los Angeles Times, Slate, The Nation, The New Republic, and The Paris Review. Private Property, a multimedia play she co-wrote, was produced at the Edinburgh Festival Fringe and was featured on BBC-TV. 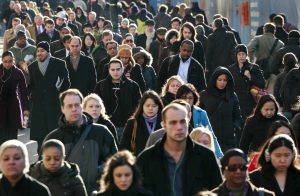 Suji Kwock Kim adopts a facetious tone in her poem “Slant” that might initially be perceived as sarcastically critical. After rhetorically asking her audience “what is the light of this city,” she begins her list of unconventional answers with an air of faux admiration in describing the Statue of Liberty as the “possessor of the most famous armpit in the world.” However, it soon becomes apparent as she describes aspects of the city that may often be brushed aside as peculiar or insignificant that her goal is not to critique or condemn. Instead, she draws attention to the understated beauty that can be found in the quirks and hidden corners of the city. The title of the poem is the first subtle hint at the idea that people hold different perceptions of the world. One’s outlook can change with the “angle of an eye,” a phrase with a clear double meaning that brings racial differences to the table. Along that line of thought, Kim joins together people from various walks of life in the city, imperfect and flawed as they are. From “the Glamazons” to the “immigrants,” the cologne-wearing “oglers” to the “refugees,” she envelops the city’s inhabitants into one whole that is changing and growing together. She writes, “all of us making and unmaking ourselves, / hurrying forwards, toward who we’ll become.” Though light-hearted and a little tongue-in-cheek, this poem sends an uplifting message of perspective and unity (ideas that tend to fall in short supply these days) as it gradually becomes more sincere, before ending with an expression of gratitude for the vibrancy of life.