When the forest caught fire, the horses
obeyed a fear greater
than what had been bred into them,
broke down the stable, and stampeded
for the opening in the trees,
which was the lake, which was water.

Of course they headed towards
the alternative, liquid,
unlike the material that made
or was burning up the rest of the hard
world they had to escape.

It was the bombardment
of Central Forces that started the fire,
in Finland. This is Malaparte’s story.

By his account, hundreds of horses
sped through flames, splashed in,
and, the second they entered, the lake
froze solid.

Which makes no sense. But never mind
science. The idea stays with us.

Snap—they were suspended,
coated and sealed, suddenly. And singly,
though the herd had entered as a whole.

It could be called tragic because
they were entombed, heads up,
so all winter, soldiers could see
the last shapes failed struggles take.

It could be asserted that the animal face—
flared nostrils, flung mane,
all frozen—is a simplified expression
of human experience.

Something might be said about that war,
what we fight now.

But to merit retelling
there need not be double meaning.
It’s hard enough that a horse
had to seek escape and was denied it,
even in decay.

Divisions are hard, how one side does not
see itself in the other, or crystallized,
cast in that clear ice.

The horror of each is its own,
alone. Beyond comparison,

and compassion. The soldiers are said
to have walked among the horses
like a sculpture garden on their smoke breaks.
Casually, to be by themselves,
between the bodies, they went
to light their little fires.

The individual man’s flame was too small
to make anything melt.
And not even summer could turn
the sharp edge of this back to water.

Poem selected and commented on by William Wright

I first read “Winter Hard” about three months ago, and the central image still canters through my mind occasionally. On several occasions, particularly at night when entering the hypnagogic phase of sleep, the stark and beautiful horses of this poem have reared up in my consciousness so vividly that I feel like I am walking among them. Indeed, “Winter Hard” features the best of Rose McLarney’s textured writing: a keen attention to archetype, to imagistic detail, to landscape, and to a narration that vacillates between a sonically lush lyricism, as in the poem’s opening: “When the forest caught fire, / the horses obeyed a fear greater / than what had been bred into them. . .” and an almost suppositional, speculative rhetoric:

It could be asserted that the animal face—

all frozen—is a simplified expression

Such a vision eludes mere anthropomorphism, but reflects a curious writer, a probing and meticulous thinker. And that instills this poem with a thrumming heart, a warmness (despite its literally freezing motifs) and specialness that precludes the poem from becoming a strict narrative. The narrator interjects—but never abruptly: indeed, the speaker prevents me from snapping my suspension of disbelief by snapping it for me. The speaker admits a story “[w]hich makes no sense. But never mind science. The idea stays with us.” Paradoxically, it is this narrative intercession that enriches the images for me, that give them half-lives, that makes me believe wholly in the recounting of the poem’s events: The poem’s dynamism never ceases, even as the central figures—the horses—remain shackled by time. 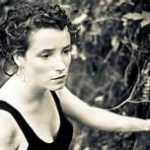 Rose McLarney has published two collections of poems, Its Day Being Gone (Penguin Books, 2014)—winner of the National Poetry Series–and The Always Broken Plates of Mountains (Four Way Books, 2012).  Rose has been awarded fellowships by the MacDowell Colony, Bread Loaf and Sewanee Writers’ Conferences, and Warren Wilson College; is the 2016 Dartmouth Poet in Residence at the Frost Place and 2016 winner of the Chaffin Award at Morehead State; and has received other prizes such as Fellowship of Southern Writers’ New Writing Award for Poetry.