I saw in Louisiana a live-oak growing,
All alone stood it and the moss hung down from the branches,
Without any companion it grew there uttering joyous leaves of dark green,
And its look, rude, unbending, lusty, made me think of myself,
But I wonder’d how it could utter joyous leaves standing alone there without its
friend near, for I knew I could not,
And I broke off a twig with a certain number of leaves upon it, and twined around it a little moss,
And brought it away, and I have placed it in sight in my room,
It is not needed to remind me as of my own dear friends,
(For I believe lately I think of little else than of them,)
Yet it remains to me a curious token, it makes me think of manly love;
For all that, and though the live-oak glistens there in Louisiana solitary in a wide flat
space,
Uttering joyous leaves all its life without a friend, a lover near,
I know very well I could not. 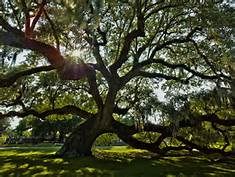 A retrospective voice leads the reader into a memory the narrator has of witnessing the growth of a tree that reminds him of himself. The voice in the first line of the poem sets up a tone of reflectiveness that is carried throughout the piece. Whitman’s use of the descriptor “live-oak,” in addition to enhancing the southern roots, emphasizes the tree’s vigorous and flourishing growth, which is also described later, by reiterating that the oak is, in fact, living… a fact that could be assumed since it’s continuing to grow.

He proceeds to paint the tree that’s supposed to be lively and growing in this very sad and solitary light. There is contrast between the negative portrayal of the moss that is just hanging versus the leaves that are uttered “joyous.” The oak is given a solemn persona, with its aloneness and lack of friends, yet it is able to produce these happy leaves, which the narrator appears in confusion and awe of. The tree’s persona is further made glum with the description of “rude, unbending, lusty” which continue to differentiate the “joyous leaves.” His use of “lusty” ties into the love and companionship brought up later in an interesting way, hinting that the narrator sees himself as lustful, as well as the “manly love” he is later reminded of. When the narrator brings up this “manly love,” it is unclear whether it is meant as a romantic love, platonic love, or if manly is describing human love. Why manly love? Why not just love? Maybe Whitman is using it to clarify that he is being reminded of his love for his friends, and not the love that the tree is lacking.

The narrator is able to see himself in the undesirable characteristics of the tree, the loneliness and lack of companions, yet fails to relate to how the tree, in its sad position, is able to produce happy things. The narrator is failing to understand how, when in a less than ideal position, one is able to still provide something of joy and happiness. Perhaps this is an insight into the differences between man and nature and how it is possible for trees and other plants to grow and live alone, but that man needs companionship in order to thrive.

The narrator then proceeds to take a piece of the tree back with him; a piece that contains all the aspects of the tree; the branch, leaves, and moss. This representative piece acts for the narrator as a symbol and reminder of how his life is, and how he wants it to be. Whitman’s use of a parenthetical statement is bold and adds a more personal and less formal tone to the piece. The statement is clearly weighing heavy on his mind if he felt the need to interrupt himself and ensure he put it in the open that “(For I believe lately I think of little else than of them,). It really gives the reader a glimpse into the narrator’s mind and his emotions, and helps ground the piece. It is at this point there has been a realization of how important his friends are to him, which the solitary life of the tree has helped him to see.

The last several lines serve as a reflection for the narrator, and contain several parallels to lines earlier in the piece. The last line mirrors the line earlier when the narrator first understands the need for companions, yet the ending line contains “very well,” adding a more intense and urgent tone, letting the reader know that the narrator has come to a definite resolution. 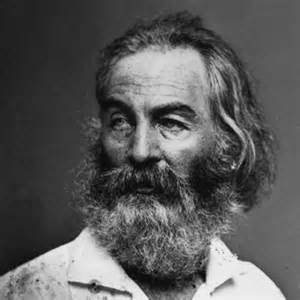 Walt Whitman (1819-1892) is regarded as one of America’s most influential poets. Some of his better-known pieces include the poems “O Captain! My Captain!” and “Song of Myself,” as well as his book Leaves of Grass.  “I Saw in Louisiana. . . ” appears in Walt Whitman: The Collected Poems (Penguin, 2004), edited by Francis Murphy.