They are walking in the woods along the coast
and in a grassy meadow, wasting, they come upon
two old neglected apple trees. Moss thickened
every bough and the wood of the limbs looked rotten
but the trees were wild with blossom and a green fire
of small new leaves flickered even on the deadest branches.
Blue-eyes, poppies, a scattering of lupine
flecked the meadow, and an intricate, leopard-spotted
leaf-green flower whose name they didn’t know.
Trout lily, he said; she said, adder’s-tongue.
She is shaken by the raw, white, backlit flaring
of the apple blossoms. He is exultant,
as if some thing he felt were verified,
and looks to her to mirror his response.
If it is afternoon, a thin moon of my own dismay
fades like a scar in the sky to the east of them.
He could be knocking wildly at a closed door
in a dream. She thinks, meanwhile, that moss
resembles seaweed drying lightly on a dock.
Torn flesh, it was the repetitive torn flesh
of appetite in the cold white blossoms
that had startled her. Now they seem tender
and where she was repelled she takes the measure
of the trees and lets them in. But he no longer
has the apple trees. This is as sad or happy
as the tide, going out or coming in, at sunset.
The light catching in the spray that spumes up
on the reef is the color of the lesser finch
they notice now flashing dull gold in the light
above the field. They admire the bird together,
it draws them closer, and they start to walk again.
A small boy wanders corridors of a hotel that way.
Behind one door, a maid. Behind another one, a man
in striped pajamas shaving. He holds the number
of his room close to the center of his mind
gravely and delicately, as if it were the key,
and then he wanders among strangers all he wants. 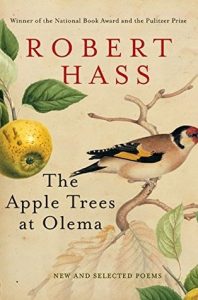 Robert Hass’ “The Apple Trees at Olema,” a poem from his 1996 collection Sun Under Wood, displays tension and unification of opposites. Associating the poems’ subjects simultaneously with death and life, peace and violence, hot and cold is more than play with imagery. Unification of opposites emphasizes a complex and honest worldview that is unashamed to admit that words only proxy insight in its rawest form. When Hass describes the “backlit flaring” of the apple blossoms, Annie Dillard’s 1976 nonfiction narrative Pilgrim at Tinker Creek comes to mind. The narrative’s unnamed speaker undergoes a quest to find the “trees with the lights in it”, her metaphor for seeing the world without the burden of bias and expectation. Dillard’s speaker quickly realizes that an immersed and authentic experience of nature is extraordinarily difficult to achieve because it cannot be forced. In response her mind learns to bend fluidly to the senses and then develop those senses into articulate thought. By celebrating the limits of description through opposites, “The Apple Trees at Olema” offers readers a similar opportunity to look at nature and relationships on unfiltered terms.

Perception limits our worldview rather than enlightens. In order to overstep the boundaries of perception, Hass unifies opposites and celebrates the emotional flow that results from immersion in the moment. Unifying contrasts begins within the first lines. At first description the apple tree appears sickly with bark that is “rotten.” But then the description is expanded, revealing that the tree is “alive with a green fire” of young leaves that “flicker even from the deadest branches.” First impression and then expansion is repeated when the woman first sees the apple blossoms violently as “torn flesh” and then peacefully as “tender.” Her perception of the blossoms follows the arc of her emotions, from “startled” to calmly “taking the measure of the trees.”

Through the woman’s emotional arc, Hass accurately reflects emotion’s physical influence on sight. When a person is startled or afraid, his pupils tend to dilate and focus on a singular detail, such as an apple blossom. When a person becomes calm his pupils tend to expand, allowing input from big-picture details such as taking “the measure / of the trees” and letting “them in.” Furthermore, in a paradoxical combination of harmony and contradiction, Hass demonstrates that the apple blossoms can be accurately described as hot with a “backlit flaring” from the sunset as well as “cold” due to their pale color. These descriptions depend on the lighting and once again the narrowness or expansiveness of detail. Fluidity of emotion reveals itself in the man’s momentary struggle to connect with the woman. Within lines he transitions from “exultant” and looking “to her to mirror his response” to anguish about her distraction from him, “he could be knocking wildly at a closed door in a dream.”

As a poet who, as Publisher’s Weekly described, “is careful not to allow his poems to be reducible,” Hass refuses to offer an “a-ha” moment of definition in this poem. However when read in terms of its emotional message, “this is as sad or happy / as the tide, going out or coming in, at sunset,” profound insight into the human condition becomes apparent in this poem. To categorize the human experience as either “happy or sad” or nature as “peaceful or violent” is tempting but ultimately limiting and inaccurate. More often than not, most persons experience multiple emotions of varying positivity and negativity at once. Likewise, a tree can possess elements that are alive and dead, such as the “small new leaves” and the “wood of the limbs.” It all depends on the observer. Hass embraces the authenticity of ambivalence in order to tap into truth.

Nature and relationships are not reducible to terms like “happy” or “sad.” Rather they are subjects that vary from moment to moment- at times tumultuously so. The truth about the limitations of perception explored in Annie Dillard’s Pilgrim at Tinker Creek and Hass’  “The Apple Trees at Olema” provides instruction for any creative thinker. When striving to think creatively, first sense creatively. Hold impressions “gravely and delicately,” like a mantra or “as if it were the key,” in order to explore observation, not perception. The result, as in Hass’ poem, will be insight that can then be developed into thoughts that are original and precise.

Pilgrim at Tinker Creek by Annie Dillard
The Apple Trees at Olema: New and Selected Poems by Robert Hass
http://www.publishersweekly.com/978-0-88001-468-7