It’s never Icarus. It’s not that grand
gesture of feather, wax and atmosphere
in flux, it’s less than that, it’s lesser than—.
It doesn’t happen in pentameter:
suffering, failure, agonies in gardens,
but in the sideways-speak of bureaucrats
whose words, like these, disguise what they intend.
Under soft, fluorescent suns of waiting rooms,
physicians’ consultations, where the lungs
on the light box are spread out like wings,
all this illumination just to show
the dark spots slowly blotting out our names.
Sadder than tragedy, and silly, these cuts
that bleed you dry. I mean you. You know
as well as I—Icarus is not for us.
He flies and falls, that’s all. He doesn’t joke
to hide his fear, or seem ashamed, or wound
lovers with rusted, jagged-edged words.
He never sulks in tristesse after sex.
He’s young and proud. He likes the sound
of his own voice. Of course the world must break
and scatter him among the falling birds.
It’s never him. His father, Daedalus—
he’s our muse, bent to an unforgiving craft
in someone else’s labyrinth, the dark
exile in which he sets himself to work:
letting the candles gutter so the wax
spills, seals vane and down at quill and shaft,
working longer into the thankless night.
He has worked feathers into these wings for years.
He has slim hope, at best, that they will hold.
Come daybreak they will stand outside the gate
and test the wind. For once he will be bold.
At last he sleeps, in fits and half-dreamed fears
that love, and work, and life are passing vapor,
and all the wings he’s made he’s made of paper.
(2015)

What do you think of when you think of suffering? Do you think of a spectacle that flairs and dies, Icarus’ widened eyes as he falls from the sky, Juliet’s wails before she stabs herself? Or do you think of chronic drudgery and the twin ghosts of fear and uncertainty? In “Musee des Beaux Arts” Auden famously contrasts the spectacular with the mundane, suffering with widespread indifference, by depicting Breughel’s Landscape with the Falll of Icarus, “. . . the expensive delicate ship that must have seen/ Something amazing, a boy falling out of the sky,/ Had somewhere to go and sailed calmly on” (Auden, lines 19-21).”  Lucas’ “About Suffering builds on Auden’s precedent by contrasting Daedalus and Icarus.

The sudden flash of Icarus’ demise, He flies and falls, that’s all (line 16)” is not nearly as comparable to the human experience as Daedalus’ toil and loss.  In this sense, Icarus becomes a foil for Daedalus and all people.  Who, after all, is young, proud and unashamed (lines 17 and 20)?  Cartoon characters, that’s who.  Real people like us find ourselves in the complex web of caregiver and cared for, sometimes hiding out insecurities for those we love and sometimes languishing in bitterness in response to those who love us (lines 16-19).  We aren’t Icarus, effortlessly taking off like Superman.  We are Daedalus, standing behind and hoping not everything falls apart.

The psychological likeness of the speaker to Daedalus becomes apparent when we consider the meter of the piece. Similar to how the labyrinth can be considered a symbol for Daedalus’ emotions, the meter can be viewed as a physical expression of the speaker’s control. In other words, to model Daedalus, whose strict world of his inventions collide with his emotions, Lucas establishes a metrical conflict between order and emotion. 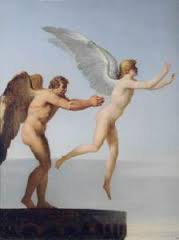 Quickly, to understand this comparison, think of Princess Ariadne and the string. Daedalus risks his and his son’s life by taking pity on Ariadne, who is in love with Theseus. Against Minos’ wishes Daedalus advises her to give Theseus a spool of string. With the string Theseus find his way out of the labyrinth, Daedalus’ own invention, and defeats the Minotaur. Now think of the poem’s meter. Overall the poem can be described as pentameter, but Lucas stretches the boundaries. Some lines are 8 syllables, others eleven. This variance is purposeful. To maintain perfect pentameter would contradict the poem’s opening statement that suffering is not neat and controlled (lines 1-7).

Part of the artfulness of poetry (and paintings) is the tension of the unsaid. Similar to the absence of Daedalus airborne in Breughel’s “Landscape with the Fall of Icarus,” not dramatizing Icarus’ fall in the poem makes Daedalus’ grief implicit and thus the more poignant. Instead of showing Daedalus’ reaction to his son’s death, Lucas draws upon Daedalus’ universally relatable uncertainty and dread for the future, “half-dreamed fears/ that love, and work, and life are passing vapor,/ and all the wings he’s made he’s made of paper (lines 34-36).”

As you can see, Lucas’ end couplet pairs two of the perhaps most terrifying aspects of human existence: the brevity of life, “passing vapor (35),” and the uncertainty of meaning, “made of paper (36)”. Shakespeare’s “Shall I compare thee to a summer’s day” and Keat’s “When I have fears that I may cease to be” address these same themes. There is no doubt that, beyond showing remarkable skill and craft, those two sonnets are so successful because they articulate fears that all humans understand. If Lucas’ end couplet gave you pause (as it did for me) you can be confident that Daedalus’ source of anguish withstands the test of time.

Some questions and answers with Dave Lucas.

Do you remember which line(s) you thought of first? Was it line(s) that came first, or the general idea for the poem?

I don’t remember how the poem began, but I know that the image of lungs as wings was the point on which it turned and became something more than just a riff on Icarus

Beyond mythology, is there anything I should know to better appreciate this poem’s context?

Probably the most immediate context is Auden’s “Musée des Beaux Arts,” from the opening lines of which I stole my title. And Auden’s poem itself references Brueghel’s painting Landscape with the Fall of Icarus, which itself references Ovid’s Metamorphoses, and so on.

Dave Lucas is the author of Weather (Georgia, 2011), which received the 2012 Ohioana Book Award for Poetry.  Named by Rita Dove as one of thirteen “young poets to watch,” he has also received a “Discovery/The Nation Prize and a Cleveland Arts Prize.  He teaches at Case Western Reserve University and lives in Cleveland, where he was born and raised.

A special thank you to the Three Penny Review for granting permission to republish “About Suffering-”.