The way some people sing for themselves
on the drive home, I kept repeating
“pondycherry” out loud, one of those
trivial chunks that pops up,
tangled with the mind’s sargassum,

and wondering where I got it, arrived at
a satiny red-brown wood that came
naturally hollowed from the mill, something
a craftsman might use in his furniture,

an elderly wood-turner and caner of chairs
who worked out of a storefront, its floor
lovely to the nostrils and eyes
with sawdust and woodcurl.

He’d be a local repository who still used
“honeywicket” for flicker, “timberdoodle”
for woodcock. He’d look at
a yard-sale chair, its seat busted
through like a basketball hoop, and say,

“That wood’s pondycherry, used to be
a stand of it the far side of Higgins Pond.
A pleasure to work with, but the fruit
would pucker you permanent.”

Pondicherry, the dictionary gives me,
a former province of French India.
But why should I choose between denotation
and the mind at play, or reject another
hint, from the depths under a word,
that I’ve lived other places, other lives? 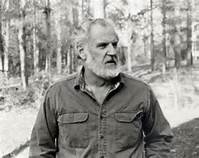 “Pondycherry” will be featured in a post on our Snopes Blog in early August, so for now we just leave it for your enjoyment.  The poem first appeared in The Atlantic and can be found (along with many other precise, surprising and radiant poems) in Galvin’s most recent new and selected, Habitats (LSU).