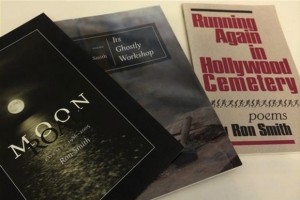 Regarding the writer’s motivation to write poetry, do you believe the poem is needed, that it expresses some deep necessity to communicate, to symbolize, or address, if not solve some problem, or give voice to some experience, that only the poetic form can reveal?

Does poetry as an art form come from an aesthetic response to crisis, or from a need to heal? . . .

Sometimes the poem comes from the vasty deep—sometimes from the silly shallows. But where it comes from is ultimately irrelevant. Remember that a poet can wade from the shallows into the deep water if he didn’t start there. In fact, maybe you could say such wading is the poet’s job.

This is complicated and contradictory stuff, but I’m going to present my answer in a way which more or less belies the messy reality of writing. Actual composition is very much a trial-and-error and improvisational business. (Faulkner said that writing a novel was like building a chicken coop in a high wind. You just grab whatever blows by and nail it on. I used to think he was joking.)

So, first, a general answer.

I personally write poems because I love poems and because I think in poems. Does the poem come from “a deep necessity to communicate”? An individual poem might not, but in general, I think, yes. A good poem is usually something that demands to be said and can only be said in the manner in which it is said. Some poems narrate or describe; some poems sing. We all need to tell stories, to make others see what we see or have seen. And sometimes we simply have to sing—out of joy, out of pain, out of fear or frustration.

And now the more specific answer. (Welcome to the sausage factory. Watch where you step.)

Here’s a formulation I came up with a few years ago. Good poems tend to be about (or “about”?) at least four different things:

the world,
the mind,
the language,
the genre.

When a poem I’m working on feels flimsy, I ask which of these I’m neglecting. I find poems that explore or express only one or two of these to be superficial.

One example: For years I tried to write a poem about the death of a good friend. Draft after draft was thin and disappointing. They were embarrassing, if not downright disgusting. Eventually, I realized I wasn’t writing a poem, not creating a work of art. I was simply crying out in pain, was howling about loss. The poem was therapy, maybe, but it sure as hell wasn’t art. It meant a great deal to me—but would mean almost nothing to a reader. The verse was a little bit about my friend (“the world”) but mostly about how his death made me feel (“the mind”). I came to realize I had to stop worshiping my own sensitivity. I had to find a way to be a poet, even with this subject. I had to explore the English language, and I had to give up formlessness and find a genre worth my attention. I had to find a way to enjoy the writing, even this writing. I think joy in creating is a necessity for compelling art. Mere dutifulness can’t cut it.

One day, my friend Shahid Ali asked me to write a ghazal for an anthology he was putting together. (He even gave me a sheet of instructions!) I poured one lame draft into the ghazal form—and before long I had a poem I was reasonably pleased with. Years later, I co-opted Eliot’s Four Quartets form for a fuller treatment of George Squires’s death. This made sense partly because I had scattered his ashes at sites in Eliot’s poem. (George’s ashes are all over the planet, in fact.)

This is not an original discovery. Poets have long prescribed strict form for overwhelming emotions. See Longfellow’s Italian sonnet “The Cross of Snow” about the loss of his wife, who was burned to death in an accident at home.

In the case of this particular subject, my answer to your question, “Does poetry as an art form come from an aesthetic response to crisis, or from a need to heal?” is, obviously, both. The poet needs the poem the way the singer needs the song, the way the storyteller needs the story or the painter needs the landscape.

Crises always produce poems—but, thank God, poets don’t need crises in order to write. Poems sometimes get started by accident. Some of my favorites come from language accidents. Charles Wright tells of a poem that grew out of misreading. Wright reports reading the Gerard Manley Hopkins sentence, “I want to be bruised by God” and saying, “Yeah! Me, too! Then he realized that wasn’t what Hopkins wrote. The sentence was actually “I want to be busied by God.” But “I want to be bruised by God” became one of Wright’s best-known lines. Lisa Spaar’s poem “God’s Gym” was inspired by a Gold’s Gym sign that had a missing letter “L.”

My poem “The Old Crabber Has Gone Deaf” started with pure language. Walking to work one morning, I heard three words in my head, “Oboe ghost sounds.” What a phrase! I wondered how it got into my head, assumed I had read it somewhere. I wrote it down, and at the end of the day started phoning my poetry friends (this was before Google). Every person I called said something like, “Wonderful! What’s it from?” “I don’t know,” I said. “That’s why I called you.” Eventually, I decided my subconscious had written it.

Such “mistakes” aren’t mistakes at all. They are opportunities for discovery. To an artist, what might seem random or arbitrary probably isn’t. The mind is always searching for material, for meaning, and even for the Ultimate. Who doesn’t want to be bruised by God? Or to work out in God’s Gym?

I wrote one of my personal favorites for students to analyze and interpret on a final exam. Since I couldn’t find the perfect poem for the course, I created one that would exhibit the techniques and themes we had studied over the previous fifteen weeks. A few months later I looked at it and said, “That’s not a bad poem. I think I can fix it up a bit and . . .”

Of course, you can’t think about all this stuff simultaneously while you’re writing. Usually, I’m focusing on solving one specific problem at the time. How does the mountain really look in the distance? How can I fill out this iambic pentameter line without padding it? How did I really feel when I read about Lucius Mummius?

But let me emphasize this again: Readers shouldn’t care where a poem began. What they should care about is where it has arrived.