This is the safety-catch, which is always released
With an easy flick of the thumb. And please do not let me
See anyone using his finger. You can do it quite easy
If you have any strength in your thumb. The blossoms
Are fragile and motionless, never letting anyone see
Any of them using their finger.

They call it easing the Spring: it is perfectly easy
If you have any strength in your thumb: like the bolt,
And the breech, and the cocking-piece, and the point of balance,
Which in our case we have not got; and the almond-blossom
Silent in all of the gardens and the bees going backwards and forwards,
For today we have naming of parts. 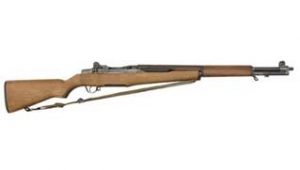 (Henry Reed: The Collected Poems, released by Carconet in 2007, is available from Amazon.)

[Maybe, as Congress debates and votes, this is a good week to be thinking about guns and where they fit into our world.  In the interest of full disclosure, I own several, some too old to discharge.  And my functional firearms are dusty, as I gave up hunting, then target shooting, years ago.  Semi-automatic rifles have never appealed to me for personal ownership or recreation.  I do support both the 2nd amendment and reasonable gun restrictions, but I am alarmed by America’s storm of gun violence and believe we must become more imaginative and honest concerning the right to bear arms and the obligation to employ practical restraints.]

The weapons instructor in Henry Reed’s WWII vintage poem “Naming of Parts” employs language that is precise and neutral, even mechanical, as if he were anatomizing a vacuum cleaner or weed whacker, and he never makes reference to the dangerous power of the bolt-action rifle he wants his recruits to be intimately familiar with.  And just as he appears oblivious to the “lethality” of the instrument he is naming and demonstrating, he is also unaware of the double entendres in his language, as they apply to both the garden and the sexuality that might be on any recruit’s mind more than (to update the vocabulary just a touch) a magazine well, ejector port, laser sight, suppressor or trigger housing.

The recruit whose thoughts shape the last lines of each stanza and form the dynamic counterpoint sees the natural, and to some degree sexual, implications of his instructor’s clinical phrases.  The bees are about their pollinating chores among the fragile and glistening Japonica (Reed was a translator fluent in Japanese), but the irony begins with the title, “parts” being euphemistic for sexual organs, a suggestion amplified by elements such as easing, the fingers and thumb, “cocking piece,” “sliding rapidly backwards and forwards.”

The tone of the whole poem and its patient repetitions, which allow for incremental accumulation of suggestion, are, though fairly dull, anything but martial, and the instructor treats his charges without the brass and bluster of the stereotypical arms instructor.  The absence of basic training bullying allows for additional subtle elements. For instance, the opening stanza contains “today” four times, as if establishing a stability, but the new soldiers are reminded that yesterday they had cleaning and tomorrow they’ll have what happens after firing.  A lot of this hands-on familiarization is necessary before stepping up to the firing line, but it’s important for the novices not to be encouraged to think about the actual shooting just yet.  So “today” is a lull before the storm, and it’s easy to sense a hint of “seize the day” in that opening stanza, a hint the trainee increasingly focuses on, as his instructor marches through the manual.

Part of the poem’s quiet impact depends upon absence, the trainer’s saying what “we” don’t have, including “the point of balance.”  Though most accept war as inevitable and the military as necessary, the point of balance between the natural, spontaneous realm and the uniform, regimented one is always worth considering, always unsettling, never settled.  And it seems that firearms fulfill some civilians’ need for a love object.

I don’t know if there’s a technical name for the pattern of Reed’s deployment of repetition and juxtaposition.  It has some of the languid feel of a sestina, some of the insistence of a villanelle, but it’s neither.  The language swivels, slides back and forth, glistens, spirals, and the author’s mustering of details about weapon and garden, his distribution of pronouns (their shifts crucial) create a beautiful warning, and a lament.  The truncation of the last line in each stanza is also somewhat ominous, but I can still find hope in the poem, as the natural world is for the moment winning the soldier’s heart and mind.  On the other hand, I pity him the coming indoctrination and consequent expertise.

I have seen videos of gun sales people and other firearms owners who are not necessarily Good- guy-with-a-gun true believers nor those unfamiliar with and unnerved by all firearms.  Their frequent discussions of the current weapon-of-fashion, the AR-15 (and its cousins), leads me to this challenge, which is not to be taken up too lightly.  I would welcome – in the comment section immediately following this post – poems which update Reed’s and imagine a salesperson or other gun expert explaining the more contemporary weapon while the listener/ buyer/whatever allows his or her mind to wander to contemporary images of serenity or procreation (including, of course, gardens and even undisguised sexuality).  I’m hoping that someone exploring the practical denotations and connotative musings will shed some fresh light.