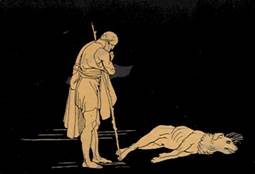 When wise Ulysses, from his native coast
Long kept by wars, and long by tempests toss’d,
Arrived at last, poor, old, disguised, alone,
To all his friends, and ev’n his Queen unknown,
Changed as he was, with age, and toils, and cares,
Furrow’d his rev’rend face, and white his hairs,
In his own palace forc’d to ask his bread,
Scorn’d by those slaves his former bounty fed,
Forgot of all his own domestic crew,
The faithful Dog alone his rightful master knew!

Unfed, unhous’d, neglected, on the clay
Like an old servant now cashier’d, he lay;
Touch’d with resentment of ungrateful man,
And longing to behold his ancient lord again.
Him when he saw he rose, and crawl’d to meet,
(‘Twas all he could) and fawn’d and kiss’d his feet,
Seiz’d with dumb joy; then falling by his side,
Own’d his returning lord, look’d up, and died! 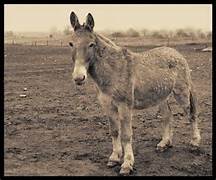 Silver will lie where she lies
sun-out, whatever turning the world does,
longeared in her ashen, earless,
floating world:
indifferent to sores and greengage colic,
where oats need not
come to,
bleached by crystals of her trembling time:
beyond all brunt of seasons, blind
forever to all blinds,
inhabited by
brooks still she may wraith over broken
fields after winter
or roll in the rye-green fields:
old mule, no defense but a mule’s against
disease, large-ribbed,
flat-toothed, sold to a stranger, shot by a
stranger’s hand,
not my hand she nuzzled the seasoning-salt from.

Alexander Pope’s “Argus” and Archie Ammons’ “Mule Song” both testify to the innocent devotion of animals. Pope, who wrote from the late 17th to the early 18th century, is well known for his translation of Homer, and in “Argus” he makes a touching ode to Ulysses’ dog, who, because of his memory of Ulysses’ scent, is the only one of the hero’s “countrymen” to recognize the returning king. Ammons, who wrote during the 20th century, makes a similar point in regards to the connection between humans and their animals, though the situation is reversed in that the farmer has sold his mule away. Ammons places emphasis on the word “stranger” by repeating it, perhaps to highlight how impersonal the killing was, for a stranger would not know or care about Silver and her “floating world.” There is a sense of irony in both poems due to failures of other people to recognize the significance of this connection.

For example, in “Argus,” the dog has lain in wait of the return of Ulysses—who returns in disguise as an old man—and while everyone else in Ithaca cannot recognize their king, the old, loyal Argus spots him as soon as he sees him. The first stanza of Pope’s poem touches on the irony of Ulysses’ treatment by his countrymen. Because Ulysses was “long kept” from his “native coast” by war and misadventure, his countrymen didn’t recognize him when he returned. This situation turns into a criticism of the Greeks due to Pope’s sympathetic attitude towards Ulysses. Though the suitors who have taken over his court in an attempt to become king by attempting to seduce his queen and kill his son would not want to recognize Ulysses, Pope’s criticism falls on the Queen. Through diction like “poor,” “old,” and “alone,” it is clear that Pope wants us to sympathize with Ulysses. Likewise, in the first line of the second stanza Pope uses the words “unfed, unhoused, neglected” to show Argus’ experience with his countrymen was much the same. From this we can tell that Pope wants us to view Ulysses as also “Touch’d with resentment of ungrateful man,” though the emotional blow of Argus’ death compounds this. Pope uses this to express the sadness of Ulysses at the changes that the passage of time has brought to his kingdom. To Pope, what seems to engender the most sadness is the knowledge that, like Argus, Ulysses is similarly “dead” to his people, for “ev’n his Queen unknown,” shows that they believe him to be long dead. Unsurprising, considering the war in Troy lasted ten years, and his journey home another ten. Considering exactly how long he’s been gone, it’s a testament to the queen’s loyalty that she has remained unmarried.

Ammons makes use of this theme, this inability to recognize, in “Mule Song.” The speaker is lamenting the death of his mule at the hands of someone who knew nothing about her. Ammons makes many references to the frailty and dependence of the mule on the farmer with “trembling,” “blind,” and “no defense but a mule’s against disease.” From this we could compare Silver to Argus, for they both die after a period of indifference. The main difference is that Silver is a bit more of a pitiful character. She does not get to be “seized with dumb joy” as Argus does, and the speaker in “Mule Song” knows this. The poem carries a strong undertone of guilt, as the speaker knows that an indifferent, cold hand killed Silver, who was dependent on him. Through words like “nuzzled” the speaker expresses a measure of warmth for the mule, and suggests that the mule felt affection and trust for him.

Ulysses and the farmer both are both forced to face the deaths of the animals they loved. The main difference in the poems is what they are realizing. In “Argus” it is a resentment at being forgotten, in “Mule Song” a guilt of betrayal. Ammons and Pope, while writing 200 years apart, capture the love and guilt that come with caring for animals and at the same time how the passage of time disrupts these relations.
— Sam Bramlett