You came in out of the night
And there were flowers in your hand,
Now you will come out of a confusion of people,
Out of a turmoil of speech about you.

I who have seen you amid the primal things
Was angry when they spoke your name
In ordinary places.
I would that the cool waves might flow over my mind,
And that the world should dry as a dead leaf,
Or as a dandelion seed-pod and be swept away,
So that I might find you again,
Alone. 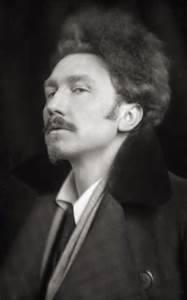 Ezra Pound’s determination to help evolve 20th Century poetry has gained him the reputation as one of the era’s vital contributors. He was revered amongst his predecessors, becoming fast friends with Yeats, as well as his contemporaries. Indeed, in a foreword to The Literary Essays of Ezra Pound poet T.S Eliot stated that Pound “is more responsible for the twentieth-century revolution in poetry than is any other individual.” It is clear that Pound held a similar respect for his peers, as he promoted other revolutionaries such as Eliot, Joyce, and Frost. Not unmindful to the past, Ezra Pound was also well-learned in Romantic and Victorian poetry, though he would prove to be an opponent of tradition in his own writing.

In this piece, we observe as Ezra Pound (1885-1972) begins to solidify his poetic aesthetics which would, three years after penning “Francesca,” engender the Imagist movement. Imagism, officially inaugurated by Pound in 1912, was both a thread and driving force of the Modernist movement. The movement worked to undermine and override Victorian and Romantic poetry’s doctrines, calling for economy in place of excess and “new cadences” over formalism.

Although “Francesca” technically predates Imagism, it both meets the movement’s requirements and imparts its desired effect. Pound has stripped the poem of superfluous language, and left behind a skeleton poem that is, at the same time, robust with feeling. Pound is able to be clear without description, and poignant without sentimentality. The subtlety of the poem is what creates its potency; as Pound exhales, “You came in out of the night / And there were flowers in your hand,” the reader senses the characters’ attachment. Despite its complete lack of romantic elements, “Francesca” an effective love poem. Likewise, the sensuality and jealousy in the piece are conferred through judiciously formed words and expert line breaks of the second stanza. Still, while the reader may be able to point out elements in the poem which convey tone, it is difficult to describe the overall effect of the piece. Instead, Pound invisibly snowballs the poem into the last word, and leaves the reader with a moment of intense emotion.