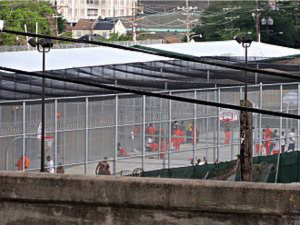 Two Sundays a month, darkness still abroad,
we round up the kids and bundle them
into a restored salvaged Bluebird school bus,
repainted green, and make the long haul

to Raleigh where their mothers are locked
in Women’s Prison. We pin the children’s names,
and numbers, to their coats, count them
like convicts at lights-out. Sucking thumbs,

clutching favorite oddments to cuddle as they ride
curled in twos on patched sprung benches,
they sleepwalk bashfully, the little aged,
into the belly of the bus, eyes nailed to its floor.

We feed them milk and juice, animal crackers, apples;
stop for them to use the bathroom,
and to change the ones so young, they can’t help wetting.
We try singing: folk tunes and strike ballads –

as if off to picket or march with an army of babies –
but their stony faces will not yield and, finally,
their passion to disappear puts them to sleep,
not to wake until the old Bluebird jostles

through the checkpoints into the prison.
Somehow, upon reopening their eyes, they know
to smile at the twirling jagged grandeur
surrounding the massive compound: concertina –

clotted with silver scraps of dew and dawn light,
a bullet-torn shroud of excelsior, scored
in dismal fire, levitating in the savage
Sabbath sky. By then, their mothers,

in the last moments of girlish rawboned glory,
appear in baggy, sky-blue prison shifts,
their beautiful hands lifting to shield their eyes,
like saints about to be slaughtered,

as if the light is too much, the sky suddenly egg-blue,
plaintive, threatening to pale away, the sun
still invisible, yet blinding. Barefoot, weepy,
they call their babies by name and secret endearment,

touch them everywhere like one might the awakened dead.
The children remain dignified, nearly aloof
in their perfect innocence, and self-possession,
toddling dutifully, into the arms of anyone

who reaches for them, even the guards, petting them too.
When visiting hours conclude, the children hand
their mothers cards and drawings, remnants
of a life they are too young to remember,

but conjure in glyphic crayon blazes.
Attempting to recollect the narrative
that will guide them back to their imagined homes,
the mothers peer from the pictures to the departing

children – back and forth, straining
to make the connection, back
and forth until the children, already fast asleep
as the bus spirits them off, disappear. 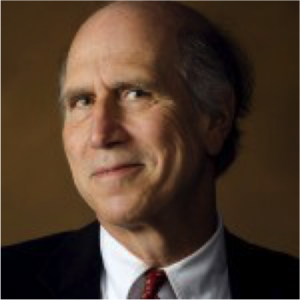 Joseph Bathanti was born on July 20, 1953, in Pittsburgh, Pennsylvania. He grew up in East Liberty, an Italian neighborhood in the city. Bathanti earned an M.F.A. in English Literature from the University of Pittsburgh. After graduation, he joined Volunteers in Service to America (VISTA), a national service program designed to fight poverty. In 1976, Bathanti was placed in North Carolina as a volunteer for the state’s prison system. Since then he’s spent 35 years teaching writing workshops in prisons and is the former chair of the North Carolina Writers’ Network Prison project. Bathanti is the author of eight books of poetry: Communion Partners; Anson County; The Feast of All Saints; This Metal; Land of Amnesia; Restoring Sacred Art; Sonnets of the Cross; and Concertina. From 2012 through 2014 Bathanti was Poet Laureate of North Carolina. His writing draws heavily on his life, ethnicity, religion, and personal experiences. His latest collection, Concertina, revolves around his experiences volunteering in the North Carolina penal system and features “Women’s Prison.”

Bathanti’s work in the prison system has greatly impacted his writing. Throughout the poem “Women’s Prison,” Bathanti depicts bringing children to their mother’s in prison on visitor’s day two times a month. The poem’s opening stanza says, “we round up the kids;” the phrase “round up” draws a parallel between the mothers in prison and their children. The second stanza continues this parallel with the simile, “count them/like convicts at lights-out.” Here Bathanti captures how entire families are impacted when one person goes to jail. Though the children of convicts have done no crime, they are rounded up and have numbers pinned to them when they go to visit the women who have given them life.

Bathanti continues the poem by calling attention to the innocence of these children by referring to their “Sucking thumbs” in stanza two, “clutching favorite oddments to cuddle” in stanza three and their being unable to “help wetting” in stanza four. These children are innocent before entering the prisons, but Bathanti hints at their eventual loss of innocence throughout the rest of the poem.

In stanza five, Bathanti refers to the children of convicts as “an army of babies,” saying their “stony faces will not yield.” Comparing these children to armies strips them of their individuality and turns them into men and women who know they are about to face horrors that will change them for the rest of their lives. This sense of loss of innocence continues in the next stanza when Bathanti writes of the children “reopening their eyes.” These children walk into the jail and are forced to face seeing their mothers behind bars. They have the opportunity to see their mothers and talk to them, but they must do so in a prison compound. Walking into this new environment may be new and exciting for them, on some level, but this new place is a “bullet-torn shroud of excelsior.” This place has the excitement of familial reunion, but it is surrounded by violence.

As the poem continues, Bathanti references the children’s “perfect innocence, and self possession” as they first see their mothers in the prison in stanza ten. Though his wording makes it clear these children are still innocent, the words throughout the poem hint that this innocence will soon trickle away. Though they are visiting their mothers, they are quickly forgetting these mothers as they were before going to jail. Bathanti writes they bring their mothers cards and drawings of “a life they are too young to remember.” Drawing these pictures is their attempt to remember the lives they had before their mother’s went away to jail and left their families in shambles.

As Bathanti words it, these children are trying to “recollect the narrative/that will guide them back to their imagined homes.” In these lines, Bathanti uses the word “homes” instead of houses. Since a home is distinguished from simple being a house by the fact that a family lives inside, this specific word choice emphasizes that these children are attempting to find a path back to the families they used to have. This poem ends with these very children “straining/to make the connection” until they all eventually “disappear.” These disappearances not only show how the children leave the prison, and their mother’s worlds, but also show how from these experiences these children lose a part of themselves, their innocence.